Music videos help artists to visually express the meaning behind their tracks. More often than not, these videos offer a deeper understanding and connection to the message behind each song while providing entertainment. In this new series, we will be doing a monthly roundup of music videos from our homegrown musicians that fly under the radar.

Check out this list of our roundup of music videos from homegrown artists and contact us at hello@hear65.com to submit your music videos!

Helmed by Midnight Posse Films' Jed, the music video for homegrown pop sensation Narelle's 'Complicated Love Song' has been described as a "proud clarion call" and a film "for girls, with girls, and by girls". Themes that are explored in this eye-catching video include girlhood as well as the importance of friendship between women.

Directed by Bless7Up and edited by Vadbibes' Jasper Tan, this vibrant, psychedelic music video is the perfect accompaniment to rap sensation Yung Raja's 'Mami'. From surfing on dollar bills to climbing on saris (a women's garment that is referenced in the song) and jewellery, the *SCAPE Youth Music Award 2021 winner delivers yet another delightful performance in this memorable video.

From brilliant minds over at Hello Harun comes a music video that perfectly captures the mood of Hyrul Anuar's dance-inducing song 'Bulan Sabit Di Bibir (Crescent Moon On The Lip)'. Donning a stylish suit, the singer-songwriter shows off his dancing chops against the backdrop of Singapore's central business district in one of the video's most memorable scenes. This may well be Singapore's answer to The Weeknd's 'Blinding Lights'.

Singer-songwriter Dru Chen takes fans back to the 1990s in the acoustic lyric video for his single 'Replay'. Set in a 90s-inspired boyhood bedroom with a vintage television set and floral motifs, the video shows Dru slow-dancing with a  mannequin and strumming on an electric guitar. According to the songster, his "memories came flooding back" and he "felt like a kid again" when he was on set.

The music video for 'Cabin Fever' is proof that local indie-rock band Subsonic Eye are not only talented musicians, but also gifted filmmakers. Shot by guitarist Daniel Castro Borces, the video follows frontwoman Nur Wahidah as she cycles along a scenic stretch in Singapore. The most amazing part about the music video? It was all done in one take.

While SATINA's latest single 'Closer' is about loving one's other half fearlessly, the music video for it revolves around the theme of self-love. Through her confident dance performance, SATINA encourages her fans to embrace their sensuality and be comfortable with their own appearances instead of conforming to society's beauty standards.

Directed and edited by Amanda Ong, the music video for the singer-songwriter's latest single, 'Leave Me Alone', depicts the singer-songwriter at various places in Singapore — from a bus stop to a rooftop — through a series of unusually framed shots. The most amazing thing about this video is that it was shot entirely on an iPhone.

A Day At A Time - Gentle Bones and Clara Benin

Singaporean singer-songwriter Gentle Bones and Filipina singer Clara Benin find beauty in simplicity in the music video for their duet, 'A Day At A Time'. The delightful two-and-a-half-minute long video features the two in everyday situations — from preparing a bowl of cereal to posting stories on Instagram — and even contains a segment in which Gentle Bones parodies the famous Lo-Fi Study Girl YouTube video. Also included in the music video are clips of fans holding up words of encouragement for those who are going through a tough time.

Directed by Amsyar Bakar, the music video for Izat Ibrahim's 'Battles' is the moody reflection of the pain and struggles that the artist narrates in the song. The music videos sees Izat passionately sing about the uphill battles of a relationship, hoping to help his loved one through a difficult journey.

Oh, how the worlds of Asian hip-hop have collided. In a showcase of culture and impeccable musicality, the music video for 'uRight' by homegrown rapper ShiGGa Shay and Korean hip-hop act Jay Park sees the two acts rapping about a girl they can't help but want to be with, backdropped by the iconic skyline of Singapore. The music video was shot by Jay Ahn and edited by Director Fish.

The music video for WHOLEFOODS' and khei's ROSES. is reminiscent of late-night adventures and cozy conversations with friends. Directed by Florent Corchia and edited by Melody Yeo, the music video sees candid clips of the two acts and their friends just hanging out, which perfectly reflect the laidback and chill tone of the track.

Stay up til I sleep - jaye

Thrilling and enchanting, you can't help but have your eyes glued to jaye's 3-minute visual masterpiece. Comprising of different characters, the music video plays on the story of the song, which was inspired by the countless nights that his wife stayed up late with jaye. The music video explores a love-hate relationship between the two, where one side sees unconditional love while the other sees resentful exhaustion having stayed up late.

Directed by Singaporean filmmaker Choānn, the music video for Iman Fandi's, debut single, 'Timeframe', is a cinematic experience that takes viewers into the psyche of the up-and-coming singer, the daughter of Singapore football legend Fandi Ahmad and retired model Wendy Jacobs. Combining beautiful cinematography with a stunning Iman performance, the six-minute-long video sees its protagonist revel in her individuality away from public attention.

During a Zoom call, Singaporean songstress Haneri, French DJ Duumu, and American producer Majent spontaneously came up with an idea to record the music video for their latest single, 'Waiting on You', on the virtual conferencing platform. According to Haneri, the trio thought that it was a 'cute' concept that reflected the way in which they came together to work on the song despite living in different countries.

The music video for Jeremy Chua's experimental folk song, 'Daytime Cold', invites viewers to join the singer-songwriter as he journeys through the thoughts in his head. Directed by Chua himself, the beautifully shot piece sees its protagonist, also played by Chua, embark on a meditative trek through a tranquil suburban neighbourhood in Melbourne's South-East as well as various areas in Greater Melbourne.

'粤式喜欢你 (Loving You Cantonesely)' is the passion project of homegrown filmmaker Han Yew Kwang, who grew up listening to Cantopop greats such as Sam Hui, George Lam, Leslie Chung, and Anita Mui. Written and directed by Han, the 10-minute long music video is set against the backdrop of 80s Singapore and tells the story of a man, played by Andie Chen, who falls in love with a woman, played by Oon Shu Ann, when he least expects to. It also stars local actors Henry Thia and Jasmine Sim in supporting roles. If you are a Cantopop lover, you absolutely have to check out this delightful video.

This month, homegrown singer-songwriter Jean Tan teamed up with Korean singer 양중은YANG JUNG EUN for a very special Valentine's Day remix of her 2020 hit 'Oak Cherry Wine'.  In its accompanying music video, two lovers perform a dance routine in Stockholm, Sweden that beautifully blends the traditional ballet moves with more contemporary street dance ones. With their beautiful dancing synced to Tan and Yang's mellifluous vocals, it is difficult not to be mesmerised by this video.

My Crush Should Confess to Me Instead - deførmed

An unorthodox music video for an unorthodox Valentine's Day single. In his latest track, which was released on 14 February, deførmed sings about his inability to tell the woman he likes how he feels about her and tells listeners that she should "confess to him instead". In the song's music video, the story told by deførmed unfolds in a literal manner. One of the highlights of this eccentric video is definitely the scene in which the singer sings and strums his electric guitar while staring at the camera with a deadpan expression.

Where We're Going - NyaLi and ZIONN

A collaboration between NyaLi Music, StepStudio, and Weikang Productions, the music video for Singaporean singer NyaLi's 'Where We're Going', a track that was produced by ZIONN, tells a story about an individual who falls helplessly in love with another despite her efforts to take things slowly. Adopting a story within a story framing device, the vibrant video sees the protagonist, played by NyaLi, filming a music video with a charming director. It also features a number of eye-catching dance segments that accompany the song's catchy tune.

A familiar face from the Singapore entertainment scene, veteran actor Christopher Lee, takes centre stage in the music video for Stefanie Sun's '餘額 (What Remains)'. In the 5-minute video, which plays out like a short film, Lee's character finds himself struggling to come to terms with the loss of a loved one. Sun, who does not appear in the video but worked with its director to develop its story, describes it as a tale about an individual who has to find a way to escape from the room in which he is imprisoned.

Can't Seem To Get Anything - M1LDL1FE

The music video for M1LDL1FE's 'Can't Seem To Get Anything' features gorgeous animations by the talented Phoebe Ting, Yanhan Hoo and Denise Yap. It perfectly captures the mood of the indie band's latest track and does an excellent job of depicting scenes — such as the one in which the protagonist falls through space — that are almost impossible to capture using traditional means.

Better With You - Gentle Bones and Benjamin Kheng

Homegrown Singaporean singer-songwriters Gentle Bones and Benjamin Kheng have teamed up to feature in a music video for their single 'Better With you', which was released in December last year. The music video sees them conveying their warmest regards through a pop music emergency in a sci-fi setting. The video follows Captain Bones' journey across the galaxy to respond to a distress signal from Earth, which was brought about by Benjamin Kheng's pop-star character, which closely resembles the king of pop.

'Won't You Come Around’ was released earlier this year and delivers a copacetic blend of two languages, English and Malay, in a modern R&B track. The music video reflects on the journey of a long-term relationship and touches on the growing pains of learning to understand, accept, and relying on each other. Featuring powerhouses Charlie Lim and Aisyah Aziz, the video is bound to transport its viewers into an emotional and reflective mood.

Inspired by the personal lives of Sasha M and Zaleia, the music video for 'Glass Shard' is a cinematic piece that tells a story of transformation and self-discovery. The message that the artists are hoping to convey through this video is that although two individuals might hold opposing views, they are actually more alike than they think.

Celebrate Chinese New Year in 2021 with MICappella's rendition of 10 Chinese New Year songs in 10 different musical genres! Check out how they deliver their spin to these lunar new year classics in the music video directed by Goh Mingwei. Expect seamless switches through various genres of music including Retro, Manyao, K-Pop, and more in this musical journey with MICappella.

In a rap song that blends Korean and English rap, the music video for 'TO DA WAR' sees the likes of Bennett A.K., $auceSide, Dylan Pearce, Xyanu, and SIKW_ delivering their verses in a fast-paced music video which follows the crew through various street settings. The music video is directed and edited by Dylan Pearce himself.

‘For You’  blends ethereal guitar lines, crooning vocals and a bold rhythm and bass section to create a warm-toned space of contemplative reprieve. Accompanying the song is a Wong Kar Wai inspired video where the collaboration with Singaporean director, Daniel Chan (Dan Visuals), paints a blurry night drive home, following the ponderings of a pensive salaryman. From introspective night drives home to start-stop relationships, the music video further accentuates the meaning behind the track, which explores the pains of distance and longing.

To submit your music videos for the next round up, contact us at hello@hear65.com. 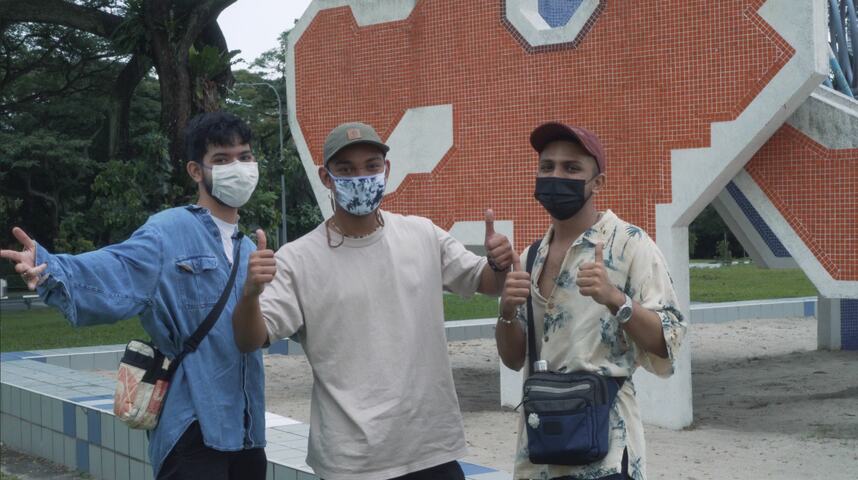