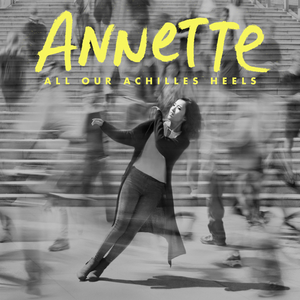 All Our Achilles Heels

Annette Lee, who records mononymously as "ANNETTE", is a singer-songwriter who writes about the human condition, and finds honesty and hope in her reveries. Inspired by both acoustic and electronic sounds, she has released her debut 5-song EP, "All Our Achilles Heels" in September 2017, produced by Scott Cash and Ed Cash When she’s not making music, she is also a writer, director and actress, and is more commonly known as Sue Ann from SGAG. -------------- Why didn't Achilles' mother just dip him again into the water holding the other heel? The story of Achilles goes that when he was a baby, his mother dipped him in the River Styx, which offered powers of invulnerability. However, as she held Achilles by the heel, his heel was not washed over by the water of the magical river. So why didn't she just dip him again? Perhaps she simply forgot? Or perhaps Homer (the author of the Achilles story) understood that Achilles needed a weakness in order for his readers to identify with Achilles. Whichever the case, its undeniable that weakness is what defines us as human. And just when we think we're perfect, we're then undone by others' mistakes. - I feel that in this world that celebrates strength, we're starting to lose our ability to deal with inevitable weaknesses. And that is why i hope you'll love this album as much as i have. P.S. It's also possible Achilles mother didn't wash him again because double dipping is socially frowned upon hahaha