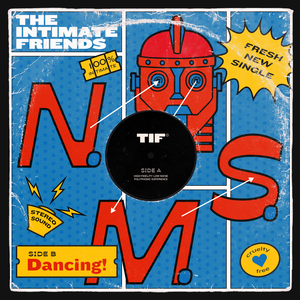 After a long journey of stylistic evolution, experimental-via-garage rock outfit The Intimate Friends finally emerge with their genre-breaking debut single, “N.A.M.S”. A work long spent in gestation, N.A.M.S is a mission statement for the band - a track rooted in muscular, soulful rock foundations, but uncompromising in its freewheeling spirit and attitude. Razor-sharp fuzz pulls back the curtain on riffs that pounce with claustrophobic walls of noise, moving from nervous verses to triumphant refrains. Guided by the tight-knit production of tenured experimental producer Fauxe, frontman Isaac Chiew snarls an ode about bitter departures over endless layers of lo-fi grit, eventually giving way to flowing basslines and bongos that culminate in psychedelic, feedback-laden glory. Within its exploratory abrasion, strains of post-punk, psychedelia and garage rock wrestle each other with chaotic colours, and the result reflects their distinctive character - a band that fearlessly challenges the status quo, operating with their own rebellious sensibilities. N.A.M.S is complemented by its skeletal cousin, “Dancing!”. Powered by bouncing basslines, relentless funk-influenced guitars and gritty, hard-edged production, the track’s raw dance-punk energy is a homage to the band’s roots, with its undeniable groove powering a tale dedicated towards surreal, fleeting encounters. In both songs, an irreverent sensibility shines through, showcasing sides of a band that takes pleasure in risks and the absurd, while also proudly embracing their penchant for passionate expressions. With N.A.M.S, the band hopes to introduce the world to its many faces - ready to not only redefine the expressions of indie rock in the Singaporean scene, but also to assert themselves, as a unique force of nature.