A visionary walks among us. His name is Chai Yee Wei and he is a filmmaker.

While an entrepreneurial drive, that has led to him helming a host of businesses, has defined much of his life, his later arc is marked by his head-turning strides into the arena of film. In his body of work, his 2017 offering Benjamin’s Last Day at Katong Swimming Complex stands out for its ground-breaking impetus: It won Grand Prix in the George Lucas Award 2018, and was up for nomination at the 2019 Oscars.

A firm believer in the idea of innovation being a rebellion against the constrictive grip of old forms and old rules, and the incredible expressive power to be mined from the intersection of film and music, he recently shared his golden touch at a workshop at Apple’s flagship store, Video Lab: Making A Music Video with Chai Yee Wei, as part of Apple’s new series, The Craft of Film.

In the interview below, he explains how he found his calling in film and illuminates how music complements the visual side of the stories he yearns to tell.

What drew you to the medium of film?

Film is just a medium for human beings to express ourselves and tell stories. These are two things that humankind have been doing since cavemen existed. It's a way for us to transcribe our thoughts. Just like poetry and prose, film is a mode of expression. I got into film because I saw it as the best way I could express myself.

Deep down, I'm quite the geek. I feel that film is one of those spaces where you have technology and soft storytelling skills at its crossroads. There's also performance art, music and sound, too, that engages all our senses into one creative whole. It also allows me to find new ways to do new things with new toys and new technology. Besides that, film breaks all barriers. It's one of those areas where who you are doesn't matter. We all watch films.


What role does music play in your universe?

Music is one of the quickest ways to get into people's emotional hooks. Sometimes, it can even be used as a shortcut to get directly into a specific feeling or emotion you want to evoke. For instance, I could automatically transport someone to the '80s just by playing a piece of music – I wouldn't need any images for that. Look at Stranger Things, for example. You just have to listen to the theme music to know that it's about a certain period. Music has that kind of power. It's one of the tools I use in storytelling.

When you think of a scene, do you already have a song in mind?

That's very interesting. Even at the story development stage, I actually compile a song list for the film. Why? Because I want to understand the mood of my film. This happens even before the script is done. For a film set in the '60s about a Southeast Asian Robbin Hood, I compiled songs from that era and specific to that region. I was looking for Singaporean bands in the '60s whose music could inform me about how the world in that time would feel like. From there, I was clued in on the pacing and texture of the film.

Congrats on Benjamin’s Last Day At Katong Swimming Complex. What's the biggest reason you had for making it and what does that film mean to you, now?

Again, it's very interesting that you mentioned this. I've only said this in one other Q&A: Almost every decision in that film was dictated by the kind of emotion I wanted to evoke therein. There were a few specific ones – guilt, betrayal, regret and hope – that played hugely into one particular tune I used. I didn't use the full version, just the instrumental. People know it as 'O Christmas Tree'. But the original tune was 'O Tannenbaum', which is about a jilted lover, hence the feeling of betrayal. In 'Christmas Tree', which is usually played at the end of the year, the music is meant to evoke a sense of nostalgia.

The film is an apology to my old swimming coach and a love letter to my younger self, who loved to swim. I bailed on my coach for the final test and I didn't have the courage to say sorry to them. Telling the story in this way was how I felt I could say sorry to him.

How does it feel to know that it's eligible for Oscar contention?

It's very humbling because this is the first time any short film in Singapore is eligible for contention. But when you're making a film like that, you don't plan on having such results. It was purely my own personal message of saying sorry. I'm just grateful that people are able to take a Singaporean film and put it on that banner. I also think it's great that the words, "Katong Swimming Complex" are next to "eligible for Oscar nomination". It's quite surreal. And again, I'm very grateful. It feels like a dream. 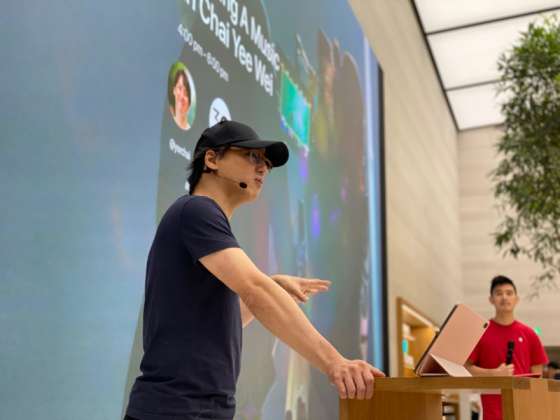 As someone without formal training, how do you esteem the value of theory in the pursuit of craft?

This is a question I've been asking my whole life. I always ask myself if I'm good enough – impostor syndrome. I've never dared to use the term "filmmaker" on myself because of the Singaporean mentality that dictates that you need to be certified for something. It was only until that win that I was confident about calling myself a filmmaker. Practice makes perfect – but you will never get perfection. There's no end day. I'm just grateful I found something I want to do until the end of my days.

Lastly, do you see music videos as existing in a separate realm from film?

Making films is not that separate from making a music video. It's all part of show business, all about entertaining people. Music videos are designed to push the music. Look at how Michael Jackson did it. He took it to a whole new level where the line between film and music video was forever dissolved. And with the rise of the MTV in the '80s and '90s, everything got more experimental and progressive. Since then, it's been established that a smart artist will use music videos as a way to stand out.