Change is the only constant. We grow and learn how to adapt through adversity, and as the famous saying goes, “Comfort zones are most often expanded through discomfort.” When COVID-19 came along to derail our daily lives, the music and entertainment sector bore the brunt of the closures that came about due to Circuit Breaker. Prohibited from operating up till today, there has been a steep drop in incomes, but still, some businesses have adapted to grow and expand in uncharted territories.

Hear65 caught up with the Singapore Symphony Orchestra (SSO), Lex(s) Entertainment Productions who run e-getai shows, and Baybeats, three entities with traditionally large-scale physical events who have managed to successfully shift online and retain their audiences. 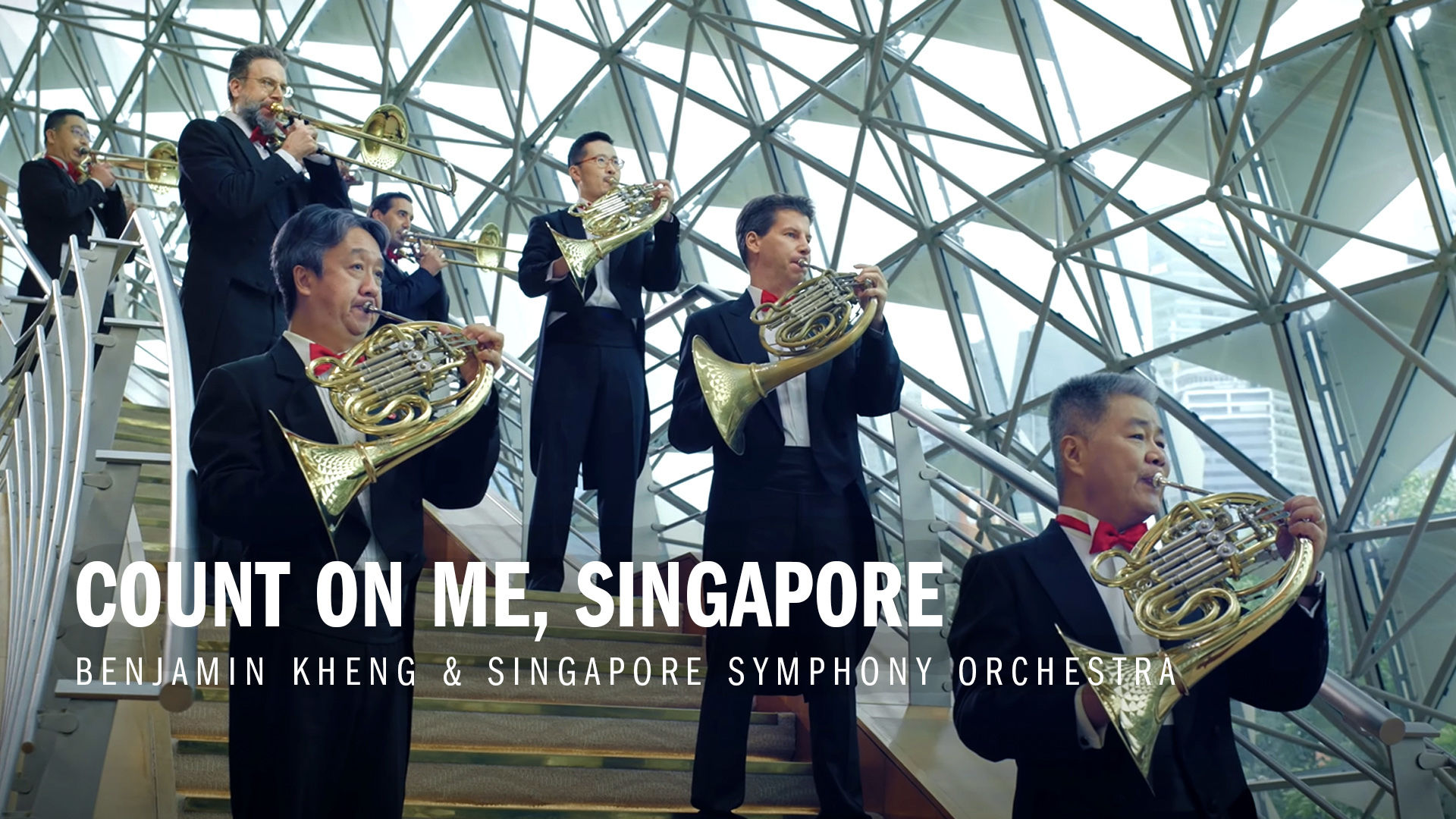 After holding the online National Day SSO concert that featured iconic NDP theme songs as well as a collaboration with local favourite, Benjamin Kheng, SSO recently rolled out an impressive line of fresh digital productions, titled ‘SSOPlayOn’, stretching from this month to October. We spoke to them on the creative process behind the planning of large-scale digital projects and the best parts that spawned from the unique experience.

What was the biggest challenge going online?

The challenges were mainly twofold: cost and logistics. Our venues are not equipped with built-in cameras and livestream facilities for digital productions, so it’s expensive for us to produce high-quality online concerts. Logistically, we’ve had to think creatively about both the music that can be performed by smaller ensembles – to allow for safe distancing measures – and how to create an online concert with a slimmed-down production crew. In addition, the musicians had to get used to performing while wearing a mask and spaced out on stage.

How did you successfully engage with audiences?

We experimented with a number of new formats since COVID-19 restrictions were introduced, including a series of video interviews with high-profile musicians, hosted by our Principal Percussionist Jon Fox on Facebook, guided meditations voiced by Singaporean conductor Jason Lai and Spotify playlists, curated by the SSO team. Our National Day Concert also included a special collaboration with singer Benjamin Kheng in a filmed performance of 'Count on Me, Singapore', which also resonated with audiences. For SSO Friends Season pass holders, we put together a special National Day pack, featuring some of Singapore’s favourite childhood games and snacks. So even though we can’t physically see our audiences at the moment, we’re constantly in touch with them, whether on social media, in concert live chats or via our email newsletters. Going digital has also opened up opportunities for us to try out audience suggestions, such as starting concerts later at 8pm instead of 7:30pm. 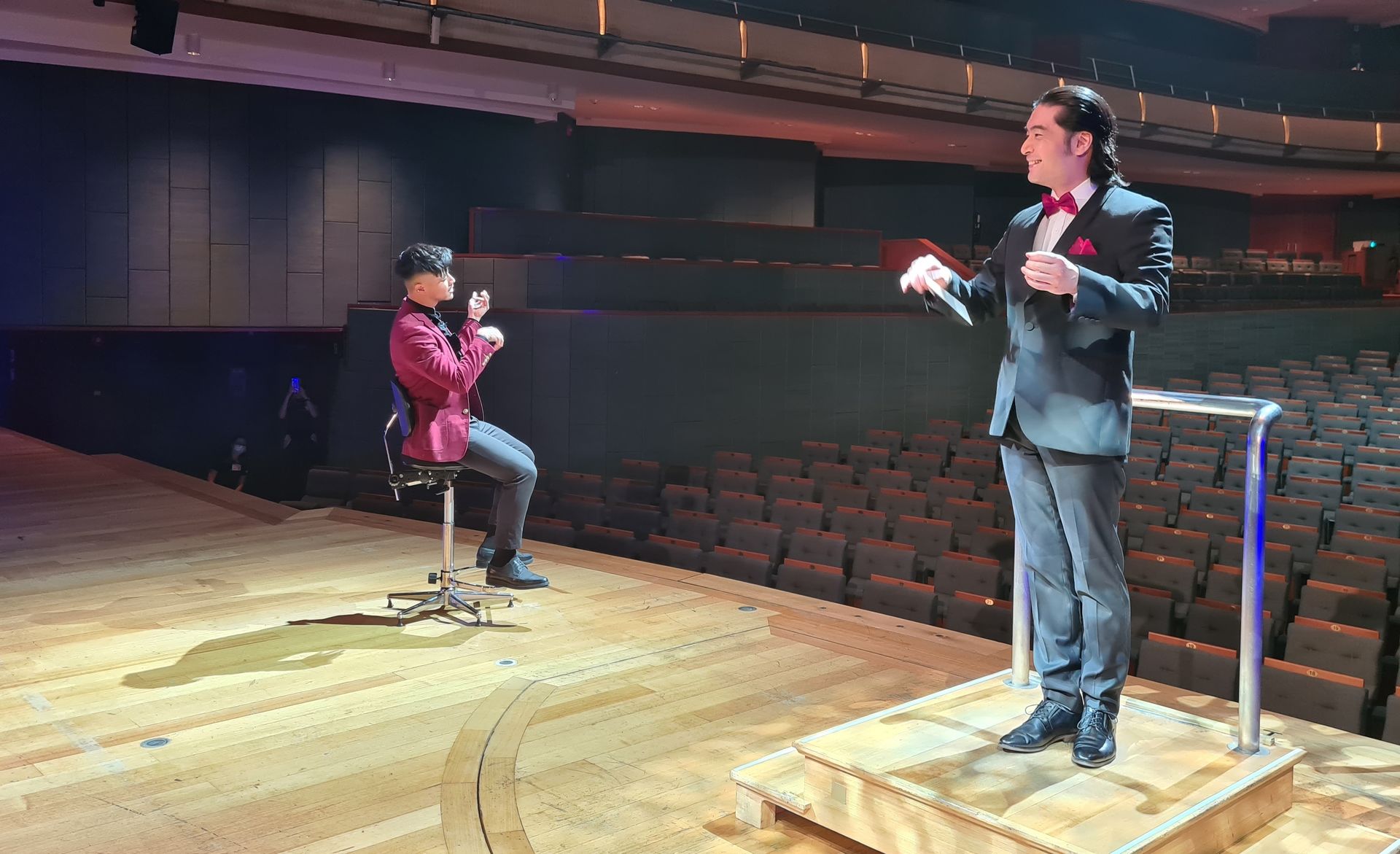 Tell us about one positive incident that happened after going online.

We have used this time to explore exciting collaborations with other orchestras – for example, we worked on a project with our strategic partner, the Melbourne Symphony Orchestra, in which musicians from both orchestras collaborated digitally to perform national songs of both Australia and Singapore. One of the first cross-border digital videos, the project was called Songs From Home and it marked 55 years of diplomatic relations between Australia and Singapore. The video is still available to watch on our Facebook page and YouTube channel.

What is the best thing about going online?

It’s been a steep learning curve for everyone at the SSO, but we are very proud to have put together a world-class digital season, SSOPlayOn from scratch in April, with very little time to plan. It has been encouraging that we had our Digital Season receive 500,000 views in the first three months. That experience is something we’ll be able to build on for the future as we continue to adapt to the new normal. Looking ahead, we are excited about our collaboration with MediaCorp to broadcast our content on their platforms, including MeWatch. 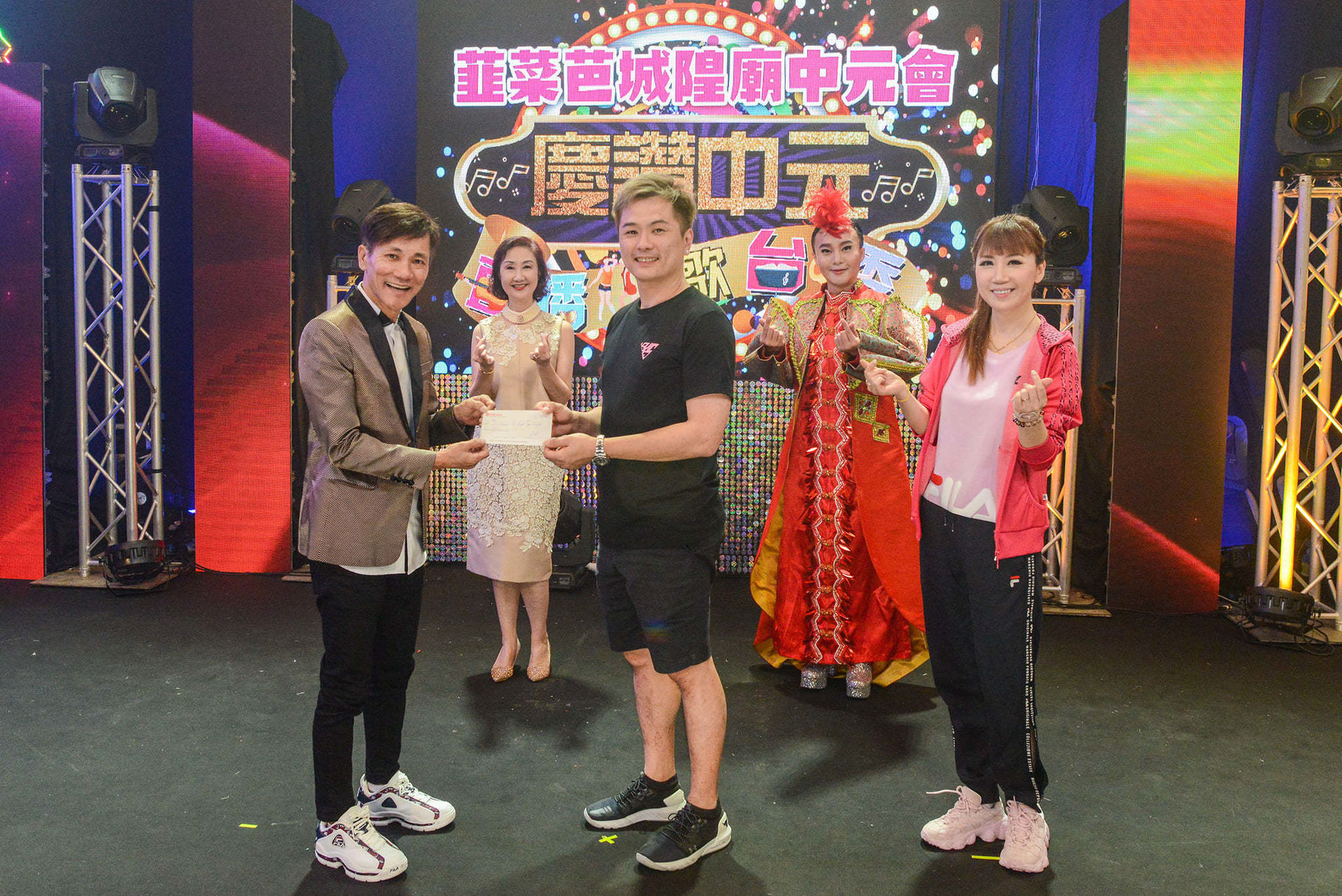 If the living are able to enjoy live music and concerts, there’s no reason why the dead should miss out. During the annual Hungry Ghost Festival, getai performances are a staple to the seventh-month tradition to celebrate the dead. Gone were the front row of red chairs and the live audience, but vibrant costumes and dramatic skits are here to stay through it all. The ban on live performances may have caused many events to come to a halt, but it has not stopped the growing popularity of e-getais. Though it lacked the exhilarating rush of the live atmosphere, e-getai live streams on Lex(s) Entertainment's Facebook TV channel have resonated well with the audience as the most popular live stream videos rake in over 600,000 views each. We spoke with Aaron Tan, Founder and Director of Lex(s) Entertainment Productions on their secret to success.

What was the biggest challenge going online?

The show production is very different for a live online show as opposed to the physical stage show in the heartlands, with technical details more amplified. But the biggest challenge has to be how to keep our viewers on our "channel", given the many distractions online. The minute the viewers are bored, they can switch "channels" easily. It's unlike the physical getai where they will stay on the ground because they are already there. 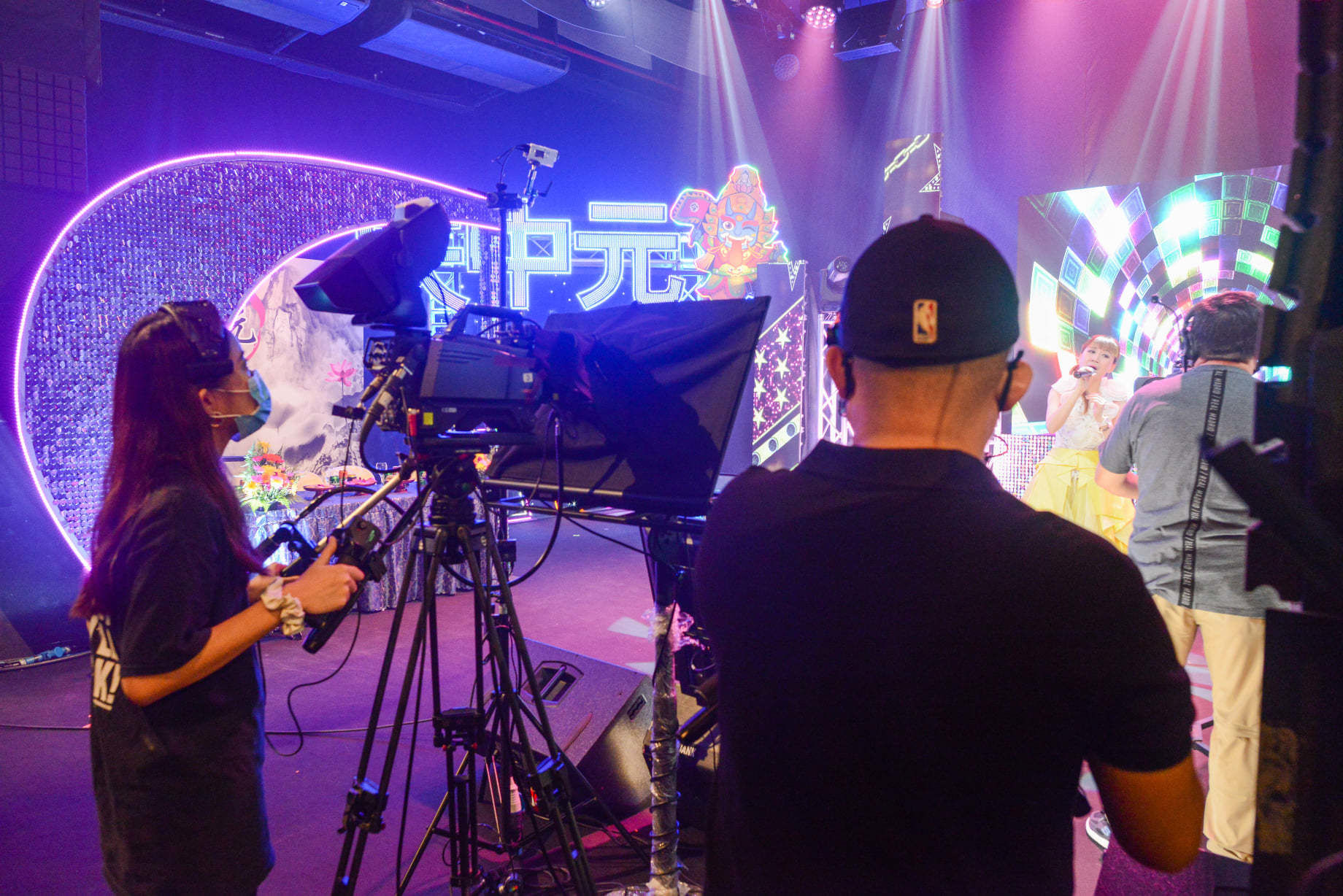 How did you successfully engage with audiences?

I have done e-getai for about four years, and over time, we have successfully managed to capture a regular following. The crux of this success depends largely on the emphasis I place on interaction with the viewers. I make it a point to engage them during the show, by responding to their comments and acknowledging their presence. The live comments are also flashed to our hosts and artists, and I always encourage them to respond accordingly to the viewers. This, in turn, fosters camaraderie between the performers and the viewers. Some of us, including myself, will also hold our individual live chats, where we take the opportunity to talk to our fans. We also get them to share with us what they like or don't like about our shows, what they prefer or want to see more of. We listen to their ideas and opinions, and this, in turn, lets them know their feedback is valued. 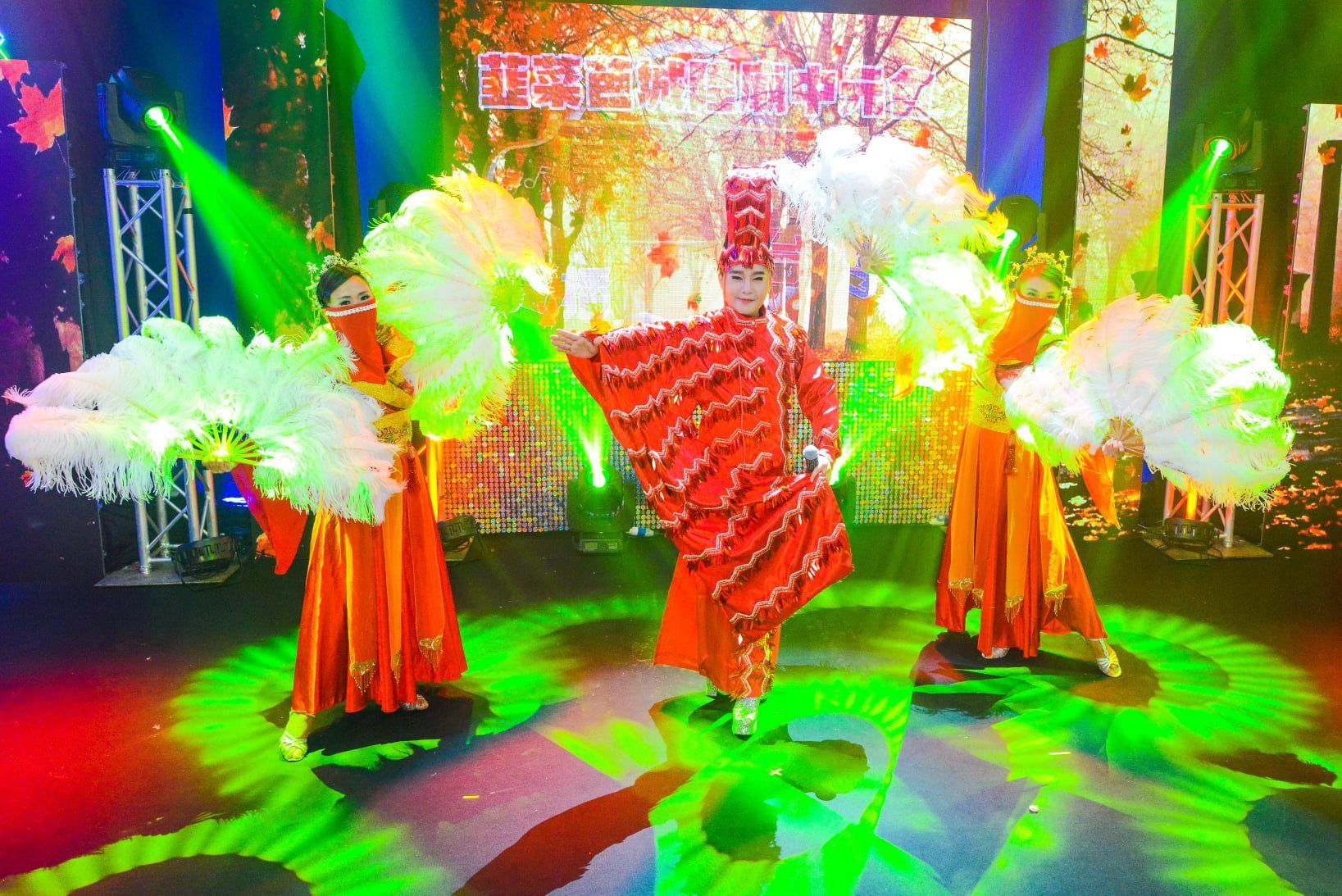 Tell us about one positive incident that happened after going online.

The most positive thing about going online is having people come up to me and sharing their appreciation. Other than being a form of entertainment, especially during this Covid-19 pandemic, the shows have served to keep our senior citizens safe at home.

What is the best thing about going online?

Aside from the above point shared, one of the best aspects of going online is that we have attained an outreach that is wider than the physical stage shows. Getai is no longer confined to an audience in Singapore. Our e-getai can reach anyone in any part of the world. It is no longer just a show for the "older" audience. We can attract a younger audience, who may be reluctant to go the ground; but when online, they are open to giving us some time, and in doing so, they are exposed to how getai has evolved over the years. And this, in turn, means that we are able to continue to keep the culture of getai going. 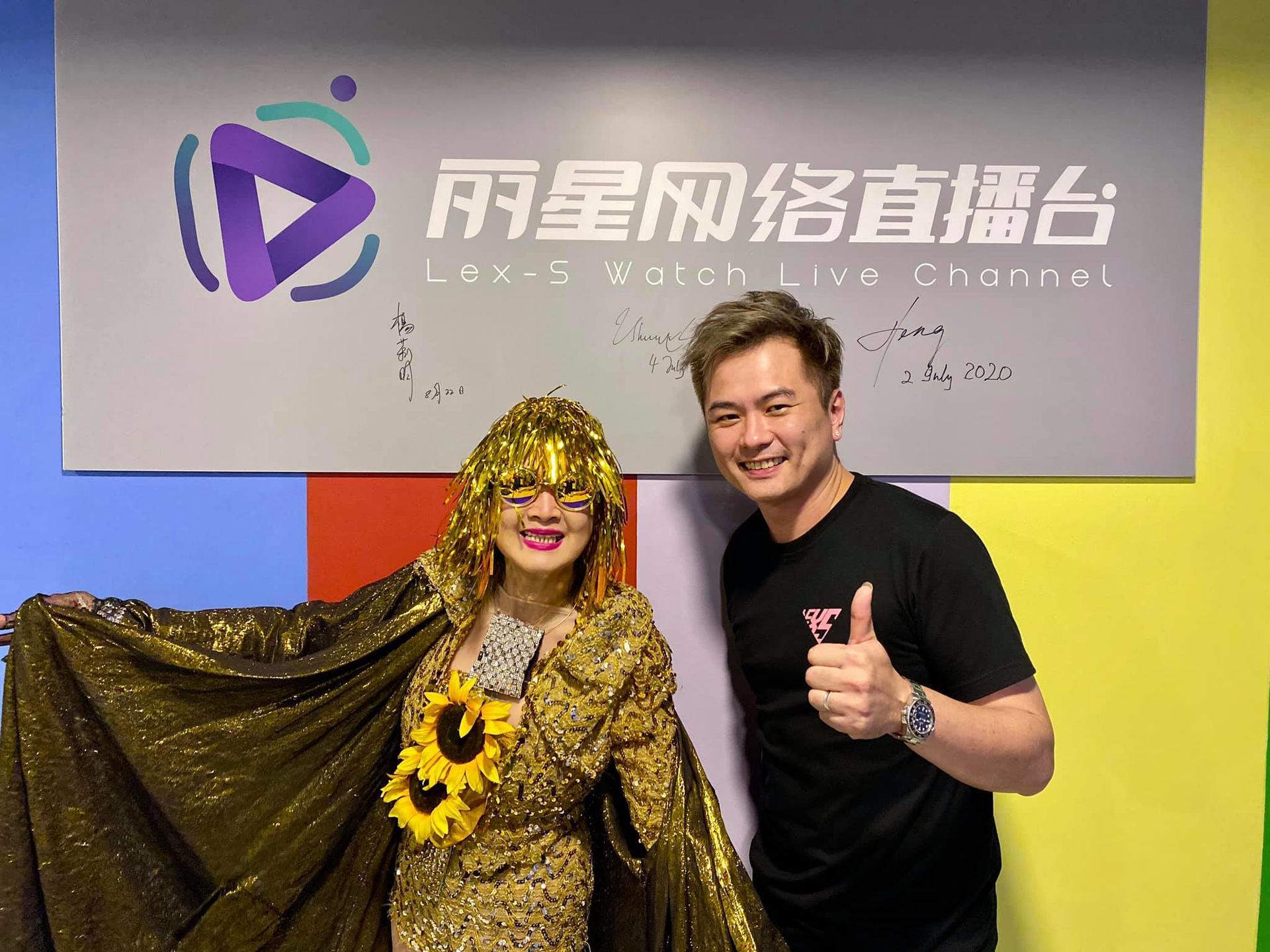 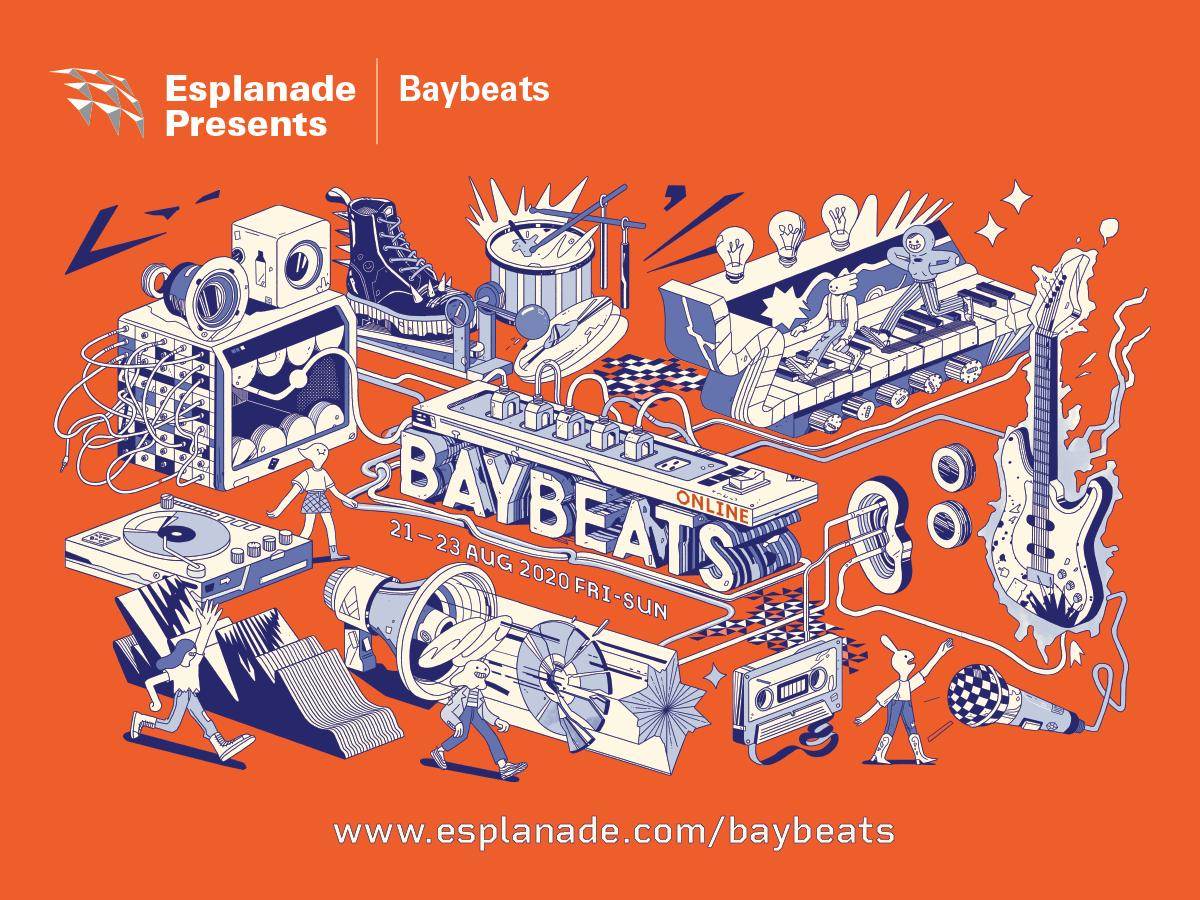 A pillar in Singapore’s alternative music scene, Baybeats spotlights underground indie artists with an annual physical festival. This year, due to COVID restrictions, it was broadcasted online in its first digital edition. The 3-day music festival was available for streaming on Baybeats’ Facebook page and Esplanade Offstage, and further split into five segments, including live performances and acoustic sets. We spoke with the lead programmer for Baybeats, Akilesh, and the team of organisers to understand their creative planning process and how they dealt with the drastic changes.

What was the biggest challenge of going online?

Like many other festivals, Baybeats is known for the live element, live energy, the whole idea of having mosh pits, and on-site interactions, which are probably one of the biggest things that Baybeats is known for. So, one of the biggest challenges was to recreate that onto an online ground, and how do we go about replicating that and bridging the gap as everyone will be watching the show from their own devices. Another challenge was the large number of online live stream activities done by other media groups, so we had to learn how to differentiate ourselves from the other presenters and how to not add to the saturation online.

How do you successfully engage with your audiences?

Thankfully, we were lucky most of the bands that we work with have a good social media following and presence.  In terms of strategies, we put together five components, from showings and live stream performances to Instagram Live talks, pre-recorded acoustic performances and finally the live talks. So all of these 5 components were put together to reach out to different pockets of people and hit many different points. We wanted to target the entire spectrum, so that was in a way a huge goal in trying to program all the nitty-gritty stuff.

An example would be the Observation Deck where there were talks and panel discussions, we had one specific talk on demystifying underground music so that's more for people who are new and unfamiliar to the indie music scene. At the same time, we also have talks on more technical stuff like how is music recorded, so we wanted to balance everything out by giving small pockets of presentation. 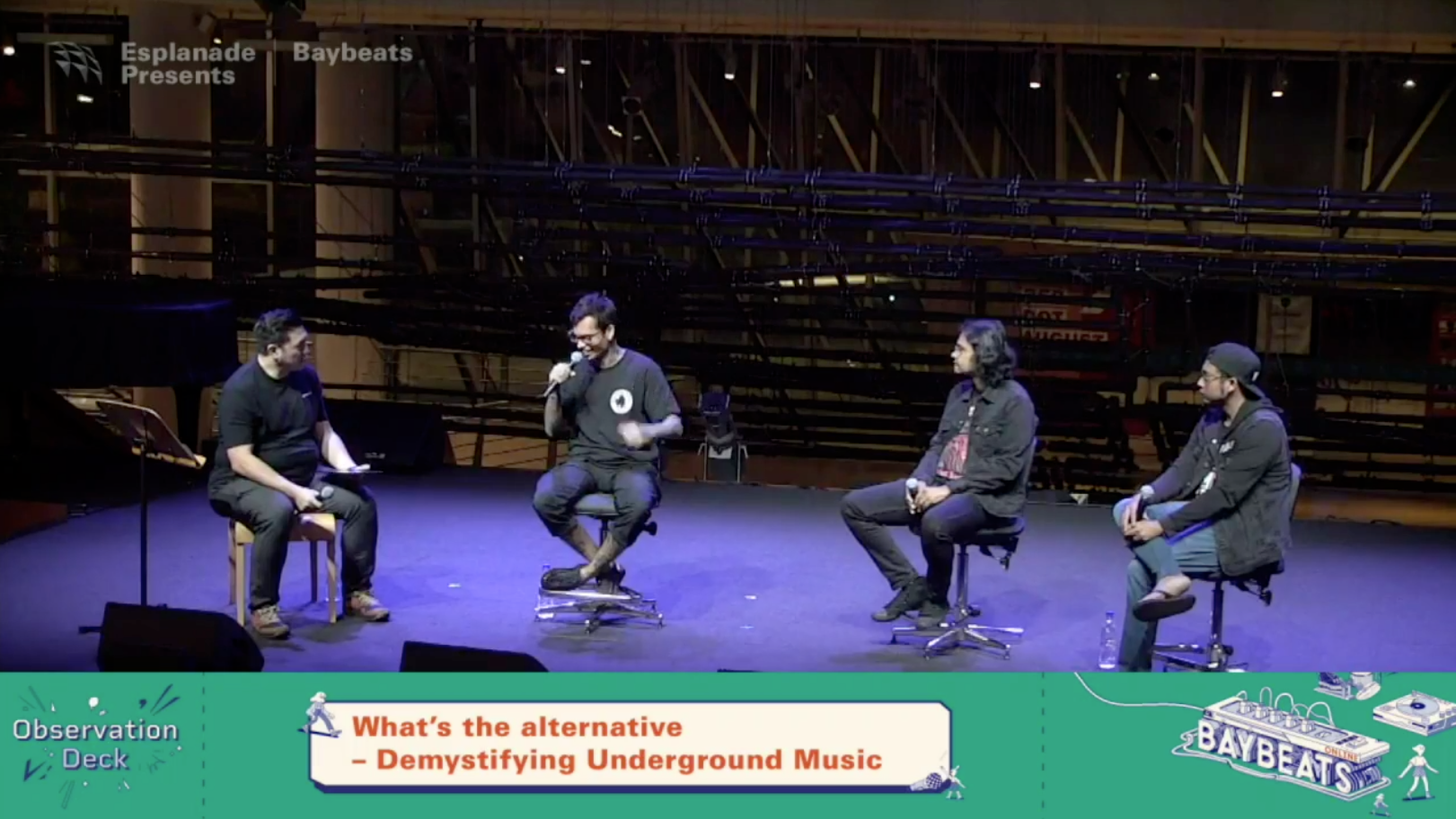 Tell us about the best, most positive thing that happened after going online.

Personally, speaking on behalf of a lot of programming officers, we are learning something new by putting up an entire live stream so that was interesting. On a bigger scale, the number one good thing about going online is that there are no physical limitations. You don't have to be at the site to watch the performances, and geographically there are no boundaries. For example, we featured two overseas acts for the panel discussions, Reality Club and Franco, so fans who are from Indonesia or the Philippines need not be in Singapore to enjoy these events. In a way, you're breaking down those boundaries which is great. It also helps us to reach out to a completely new set of audiences, and at the same time, these performances are gonna be online in perpetuity so there's no time barrier, which means audiences can watch it anytime. 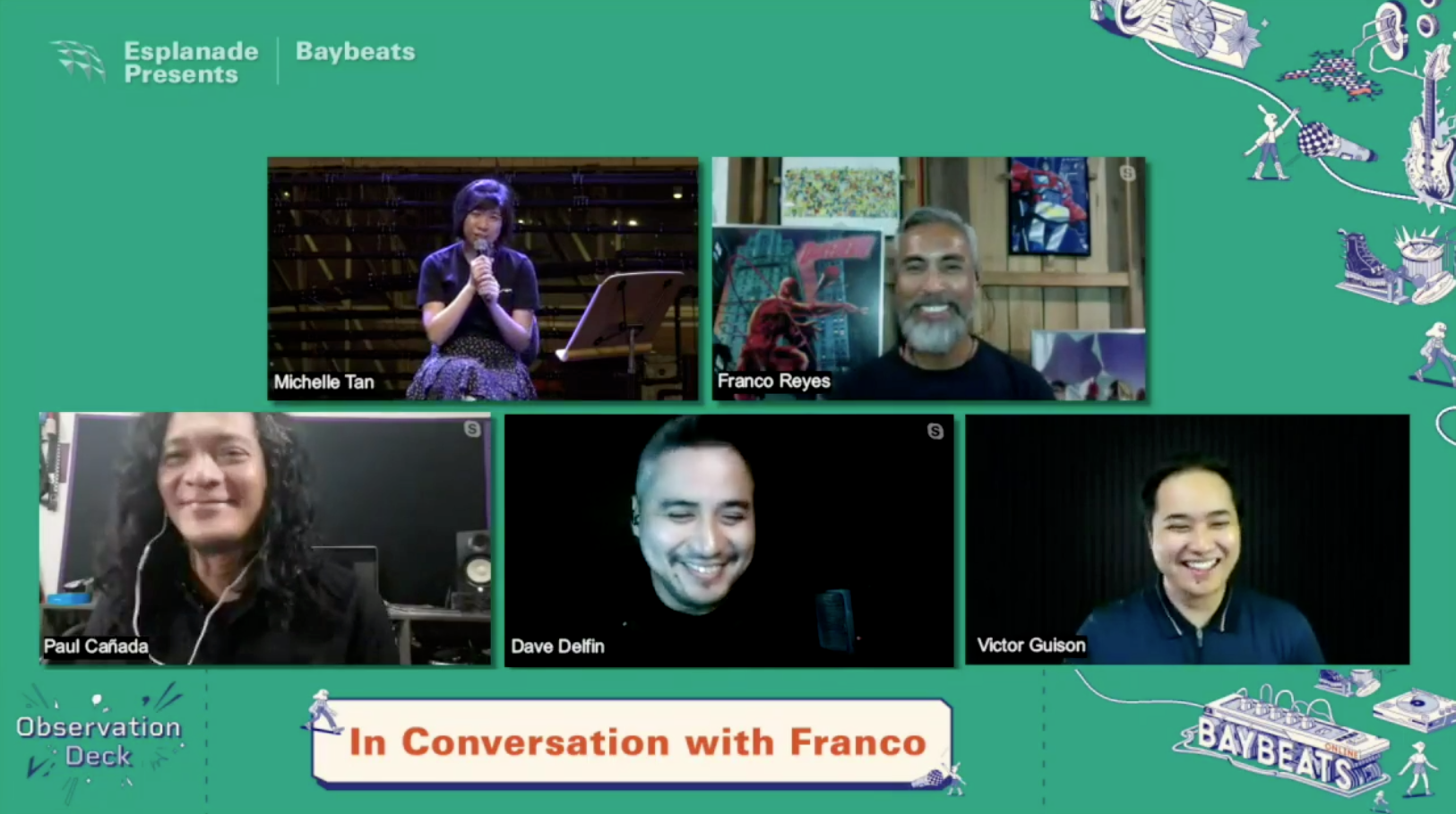 How are you planning to integrate the digital festival to the physical one that's happening in November?

One of the biggest questions is, when is Singapore moving to Phase 3? But having said that, even when Singapore opens up for visitors in future, we think that going digital and having some amount of digital presence is always a good way forward. So it really depends, you may see certain events onsite happening coupled with online performances, so whilst we are waiting for a lot of restrictions to be eased in the next few months, as much as I would like to give you the details, we are still in the planning stage. One thing I can tell you is that Baybeats is still a live festival, so we want to have that element. When we decided to move the festival to November earlier in the year, it was with a very optimistic view that by November, things will be a lot better.  So right now, where we stand is still a play by ear, of course, we are still hopeful that we can have a live festival in some form but it would very much be dependent on the guidelines, so we will abide by whatever the guidelines are for that time.