Music and art enrichment programmes are popular among parents, and most children in Singapore would have been sent for some form of artistic extracurricular activity in their formative years. When they express interest in seriously pursuing a career in the arts, however, parents are usually filled with trepidation over their prospects, and they can sometimes end up being unsupportive.

This irony illustrates a problem faced by many aspiring musicians in Singapore. It is not uncommon to for parents to want their children to become doctors, lawyers and businesspeople – jobs that guarantee a relatively infallible income. The unstable nature of being an artist in Singapore, understandably, causes many parents to not want their children to tread that path.

However, that is not the case with The Lesslars, a family band made up of Chris and Monica Lesslar, both 46, and their children, 11 year-old Camille and nine year-old Craigston. Mr and Mrs Lesslar held the kids by the hand and dove head-first into the action when they noticed the passion and talent that the siblings possess in music. A music educator himself, Chris is well-equipped to help his children pursue their artistic interests.

Below, we speak to The Lesslars (including a very shy Craigston) about being a family-based band, supporting the aspirations of the youth, and their upcoming projects.

How did you come to the decision to play as a family band?

Chris: Well, it started in 2014 when Camille and myself entered a competition on Okto, it was called One Minute of Fame. She wanted to give it a go, so we tried it out. We made it all the way to the finals and finished second. It was our first time entering a televised competition – not only for her, but also for me, too.

It all started from there. Since then she's grown older, but she's always wanted to be a singer. After the competition, Craigston and Monica came on board and in 2016, we started seriously playing together as a band.

Monica: So, essentially, they brought the family together with the determination that they had to finish what they started.

Camille: It was really tough back then because I had my exams at the same time. So usually, after school, I'll finish up my homework, and then mum and dad will rehearse with me.

Initially, I didn't know how to play any instruments, but my mum taught me how to play the piano. So, I've been practising ever since. The first time I ever played the piano live was our previous gig, at The Crossroads' launch party. It was kind of intimidating at first, but after a few songs, it got easier and I want to do it more!

Who makes the decisions in the band then?

Chris: It's a collective effort. But since I'm the eldest, I think they kind of gave me the arm band to be the captain, so to speak. [Laughs] I make the arrangements for shows – when and where to perform etc. I am, somewhat, the manager of the band. Besides that, when we first started, we were a cover band. But, ultimately, we all decided that the best way to move forward is to compose our own songs.

At what age did Camille and Craigston get into music? How did the interest develop?

Camille: For me, it actually started when I was really, really young. As a kid, I really liked Katy Perry and her generation of musicians – the music just makes me happy. Every time I hear her songs, I'd start dancing and humming to the tunes.

Also, my dad has been playing music for a long time already. He inspired me to sing and play music. When I saw the open call for the competition, I asked my parents about it immediately after school one day – my dad actually agreed! From then on, we started practising and playing music together, and now we're here!

Craigston: I started playing when I was six. [Laughs]

Chris: He's a man of few words. [Laughs] The reason why he started playing drums is, I think, because he can be at the back of the band – just being there, keeping time and just to be present with the family. [Laughs] He started when he was six, took all the exams, and now he's preparing for grade five.

Chris and Monica, what would you say to other parents whose kids wish to venture into music?

Chris: I would say to just let them pursue it, because it's not all about fame and money. If you're in it for that purpose, then I think that's already a wrong concept altogether. The reason why the kids are playing music is because of their passion for it, not for anything else. I mean, it'll be good if they have are sorted in the future, but the main purpose now is just to pursue their personal interests. For Camille, it's singing and playing piano, while Craigston is all about drums.

I think it's best to let them try things out as soon as possible, but I always look out for their interests and what they believe in. Age plays a part, too. From my experience, I believe it's best to let them start around six years old – that's when they start to develop as a person also. It also helps to build confidence and keeps them disciplined.

Monica: I agree. In addition to that, it also helps cultivate perseverance, dedication and motivation in the children. This applies to parents whose kids wish to venture into other fields as well, not just music.

Chris: Yeah, it applies to anything. For us, it's music, but if they want to pursue other interests, why not? When it comes to music, I think they should take it as a hobby – but be passionate with it. For whatever purpose, as long as they are have passion, the perseverance to learn and the desire to practice, they will go far!

Monica: I feel that success is a product of process, anyone can achieve it. We just have to support the kids and motivate them to strive hard – support them physically, emotionally, spiritually, and, of course, financially. [Laughs] 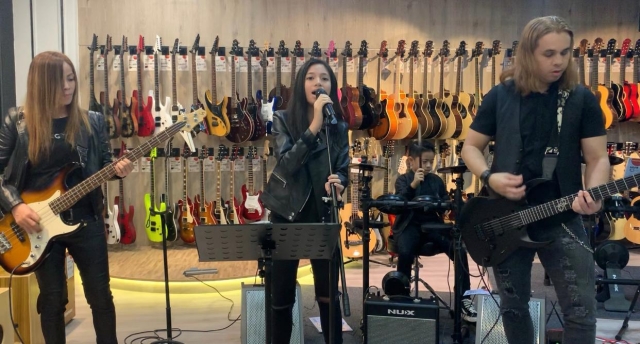 What can you tell us about your upcoming album? How is it coming along?

Chris: We've written about 30 songs, but we shortlisted 10 that we feel suits us. All the songs are written by Camille and Craigston themselves, and we just them make edits and corrections here and there. So, it's a collective effort when it comes to making music. Monica and I got the easier parts – we just play! [Laughs] The writing is mostly done by the kids.

All the songs that we wrote are about hopes and dreams – nothing out of their league; at this age, it's all about their ambitions. Tentatively, the title of the album is Hopes And Dreams. The songs that the kids wrote are all about the desire to perform at the highest level and where they wish to see themselves in the future. It's also about believing in themselves, so it's very inspiring for it to be coming from Camille and Craigston.

When is the album projected to be released?

Chris: Well, towards the end of this year, we will be going to the studio. We'll be releasing a single first hopefully in the first quarter of 2020. The song is called 'This Is My Dream', and we chose it because it encapsulates the kids' dreams. We hope the single will be a good prelude to the album, which will hopefully be out towards the middle part of the year.

What do you want people to take away from your music?

Monica: We want to encourage people to set up a goal for themselves – write down their dreams, research about them, and make a timeline and plan to achieve them.

Chris: We hope that the songs can inspire kids to believe in themselves and to pursue their ambitions, in music and other aspects, too. Basically, I hope our album inspires everybody, especially the youth.

Camille: In the world we live in, it is common for others to criticise you for being who you are, and it's really tough! I hope that people can draw strength from our lyrics to not give up. I know it's cliché and everyone's saying that, but you shouldn't change who you are just because of a remark made by one other person. If you ever feel down, know that our music is here, and know that the pain is only temporary – there's always light at the end of the tunnel, and happiness will come again.

Craigston: I hope people can learn to just believe in themselves!

Finally, what are your plans for the rest of 2019?

Chris: We plan to do more shows – we want to do as many as possible. We hope to play in more venues besides clubs, bars and cafés; festivals, if possible! We want to showcase our originals, share what we have, and for the kids to experience the atmosphere of playing on a bigger stage.

Camille: For the rest of the year, I hope I can get to a point where I can sing at open mics on my own. I tried it overseas, and it was really fun! It's not like I don't like singing in the band, but I also like singing covers on my own. I also hope to play at concerts, I think that'll be really fun. I want more people to get to know more about The Lesslars, and hopefully they'll like the album.

For more information on The Lesslars and the band's upcoming shows, check out its Facebook and Instagram pages.