It's been some time, but you may remember the song ‘Happy Little Pill’ by Australian singer Troye Sivan, which topped both iTunes and Billboard charts back in 2014. But do you know that it was co-written and co-produced by a Singaporean?

Here's an introduction to the producer and songwriter Tat Tong, who is the first Singaporean to enter the top 10 of the Billboard 100 and has produced for K-Pop band SHINee and Taiwanese superstar Show Luo. Saying that Tong has come a long way is an understatement – that’s only a glimpse of what he has done in his career.

Despite his impressive credentials, the 36-year-old's professional music career took off only in 2011 after his graduation from Cornell University in New York and six-year government bond with the navy, where he realised music was what he wanted to do more than anything else. As is the case for many Singaporeans, stepping off the conventional path did not come easy for Tong.

Tong's proficiency in English and Mandarin did give him an advantage, and helped him gain entry to both Asian and Western markets. His career kicked off with producing and songwriting for local clients and a few overseas ones like Hong Kong singer Jonathan Wong, who was then also new to the scene.

As Tong’s catalogue grew, he found his way to bigger Asian artists like Show Luo and Vanness Wu, and eventually international acts like American DJ Elephante, whose track 'Age of Innocence' was co-produced by his songwriting-producing group Trouze, which also includes fellow Singaporean DJ Declan Ee and American Idol Season 12 finalist Jovany Javier. The song went on to hit the Billboard Dance Club charts at #17.

Hear65 spoke to Tat Tong about his transition from academia to music, challenges he's faced throughout his career, artists he’s worked with and more.

You went to a prestigious university and had a promising career before you, but chose to give it up for music. When did you make the decision, and why?

I took up the SAF Merit Scholarship when I was in OCS, spent 4 years in upstate New York studying Computer Science (and singing in an a cappella group!) at Cornell, then graduated and came back to Singapore to serve out my six-year bond with the Navy. After a relatively rough two to three years, I wasn't sure if the career was the best fit for me, and whether it was the best choice in the long run for my personal happiness - or whether it was terribly self-indulgent for me to even prioritize that so highly.

In the midst of this internal conflict, music once again became my outlet for my feelings. I dusted off the old MIDI keyboard and wrote a very cathartic song about my career struggles called 'When It’s All Done' that I uploaded on Soft.com.sg - and was then randomly talent-spotted by a representative of Touch Music Publishing. Flattered but well aware that I wasn’t able to make this my career while I was still in the Navy, I took a meeting with them and thereafter decided to continue writing songs as a hobby. By the fifth year of my stint with the Navy, and having amassed some savings, I was weighing my options - between getting a PhD, and going into music full time with my savings as a safety net. In the end, Universal approached me to sign me to their songwriting roster, and music won.

What were the challenges of making this decision, and were your family and friends supportive?

Being a Singaporean and a son of accountants I guess I’ve been brought up to be very practical and pragmatic!  Finances were definitely on the top of my mind, but having been prudent with my money while I was in the Navy, I had managed to save enough for a decent safety net, fully expecting to make no money in music at the beginning. Plus I didn’t have much in the way of obligations like kids or other family dependents, which made my decision a lot easier. My parents were understandably (and to this day!) worried, but supportive - in fact, my Mum is still my accountant, and knows everything about my business’ finances, which probably helps alleviate some of her anxiety.

What was most challenging about teaching yourself production skills, sound engineering and recording in your dorm room?

As a poor college student with limited finances, YouTube and online forums like GearSlutz were definitely a godsend. Also, the early 2000s were a time when laptop music production was starting to become a technological reality and entry-level audio gear was finally becoming mass produced and very affordable, which I’m thankful for. However, I could never fix up my room acoustics well enough to do good mixes, and neighbors were constantly complaining about the noise. But necessity is the mother of invention and I guess that time spent hacking my way through these obstacles taught me to do a lot with very little.

What would you consider your breakthrough project and how did it come about?

There have been so many turning points in my career thus far, but one of the biggest turning points was getting a single with Taiwanese artist Show Luo - 'The City Is In Love' in 2012.  That song was pitched to Show’s label by Universal Publishing, and went to #1 for three consecutive weeks in Taiwan. It was then placed in two major ad campaigns: for 7-Eleven Taiwan and PepsiCo Foods China. The success of that song didn’t go unnoticed within the broader Universal ecosystem, and after a regional conference of high-level executives, the US office was interested to speak with me.

As you can imagine, this was pretty exciting and a rare opportunity as the US territory is full of amazing creatives and the flow of material tends to be quite one-way - from the US to the rest of the world, instead of the other way around. I jumped on a flight to Santa Monica and met with then-Senior VP of Creative/International Donna Caseine. Despite her insanely busy schedule, we sat in her office for a full 2.5 hours, talking and playing music.  At the end of the meeting, she set me up for two sessions - with Grammy-winning songwriters Jackie Boyz (Madonna, Justin Bieber) and Damon Sharpe (Jennifer Lopez, Ariana Grande), and told me that I had her support if I decided to move to the US to make inroads in that market.  And that's how I decided to make the leap over.

What is your best memory of working with an artist?

Every artist brings something special - it’s always a treat to be in the room with great talent, and I find it hard to single out any one experience - this is real talk, not me trying to be politically correct! That being said, one recent highlight was definitely working with Luis Fonsi and JJ Lin on the Mandarin version of 'Despacito'. They are both phenomenally talented artists and you’ll never find any nicer guys in the business. Jovany (my team partner) and I flew over to Miami to record and produce Fonsi, focusing on the Chinese parts in the new version, and our jaws literally dropped at how quickly he mastered some really tricky diction without having spoken the language prior to our session. It was also personally special for me, as Fonsi was one of the first Spanish artists whose music I had listened to (from way back in the late 90s). 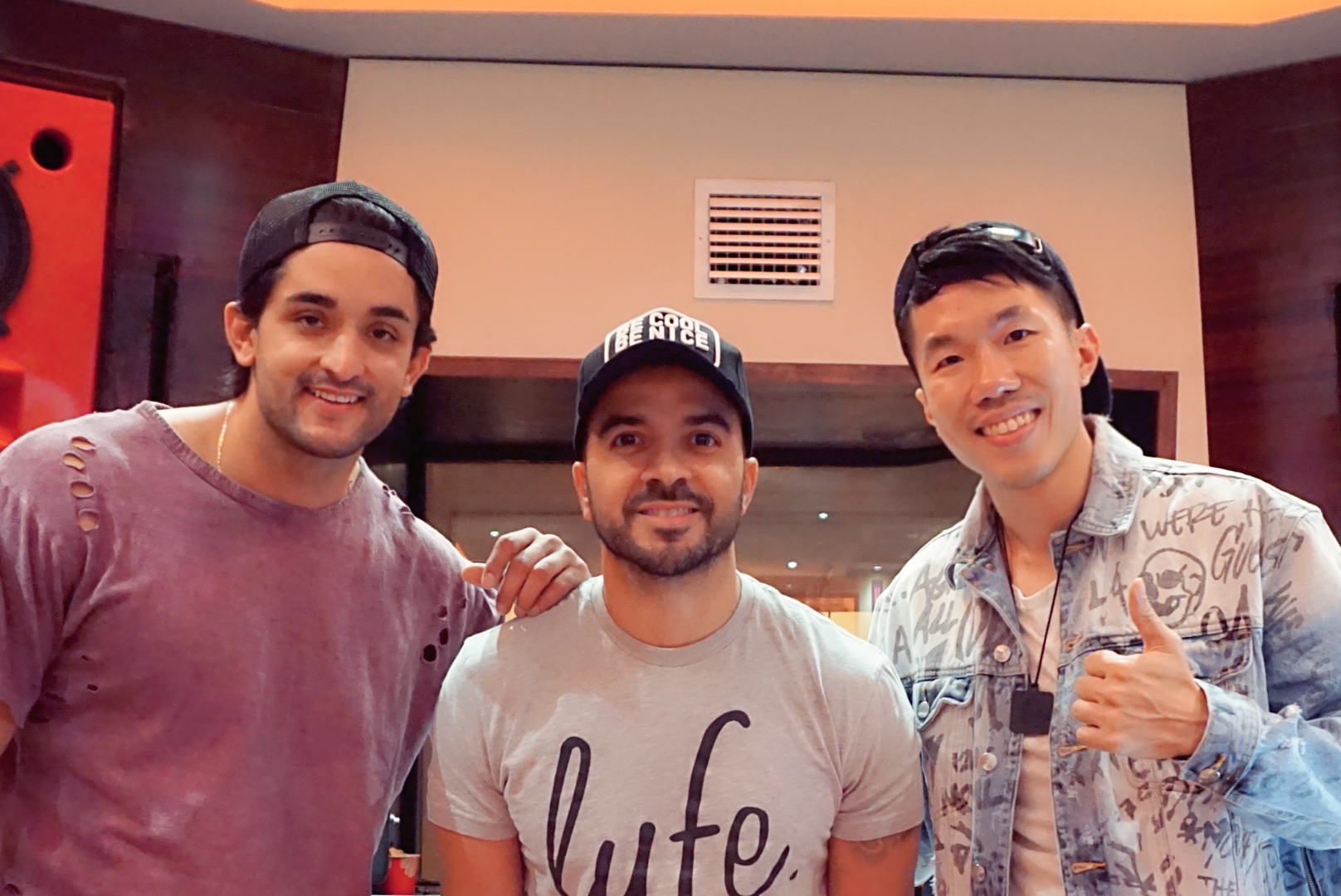 A photo from the sessions for the Mandarin version of 'Despacito'. From left to right: Jovany Javier, Luis Fonsi and Tat Tong. Photo courtesy of Tat Tong

You came from a classical and a capella background. How did you get into pop and EDM?

I’ve always listened to Top 40 radio from when I was a kid - that coexisted side by side with my classical training. Even in college, I was in two groups - the Glee Club (men’s chorus) where we sang Bach and Beethoven, and Last Call (all-male a cappella) which performed pop covers. So pop and electronic music (later EDM) have always been part of my musical diet - which is fortunate, since I do need to pay the bills doing this and there is definitely a larger market for commercial pop music than classical out there. That being said, I still enjoy a good orchestra or chamber music concert and that music still gives me the chills like no other. It’s beautiful.

What advice do you have for aspiring Singaporean producers and songwriters?

The world is our oyster. With the Internet connecting all markets with global social media platforms like Instagram/Facebook and streaming platforms like Spotify/KKBOX, the floodgates have opened and now, there is absolutely no reason why Singaporean musicians can’t make a splash in any music market in the world. We are a bridge between East and West.  We are bilingual and have grown up in a country that’s historically been open to ideas and trends from everywhere in the world. It’s in our DNA as a country - and yet, I feel like there is a lot of baggage holding us back from claiming our place in the world artistically. So, whatever we want to do, we should just go for it and not let any mental barriers hold us back.

What projects are you currently working on? We understand if you cannot disclose details, but it would be cool to hear even in broad strokes what's next for you!

I hate to, but I have to be very vague about this. Recently, the team has been working on a whole slew of releases for Latin pop acts. We’ve also been putting together our own releases - with Trouze, and maybe more in the near future!