While Singapore has no shortage of talented artists whose music spans a multitude of genres, they do not always receive the recognition that they deserve. Often, artists go unnoticed, possibly due to reasons such as insufficient publicity and the lack of adequate platforms to showcase their music.

Underexposure could be a key reason for Singaporean’s lack of familiarity of local artists but it has not reduced their interest in homegrown music.

The study utilised three main research methods, namely in-depth interviews, focus groups discussions, and quantitative online surveys. The participant pool ranged from individuals who are already familiar with and appreciate homegrown music to those who are unexposed but still find local music valuable. 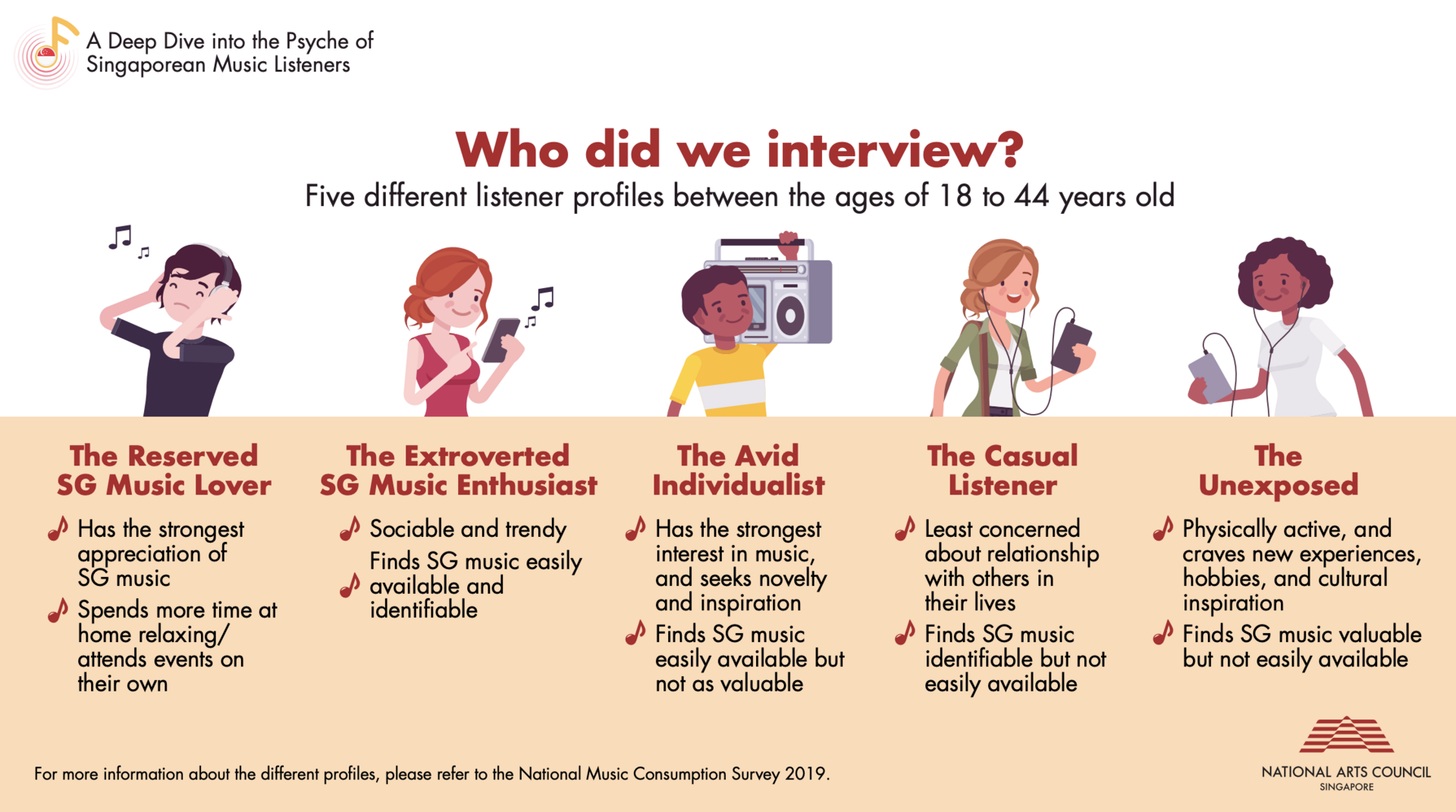 The research has found that pre-exposure to local artists can help to generate interest in them, with 75% of Singaporeans expressing their interest in continuing to listen to local music after hearing part of it. Notably, 70% of those who were not originally exposed to or interested in local music showed interest as well after listening to homegrown music playlists. 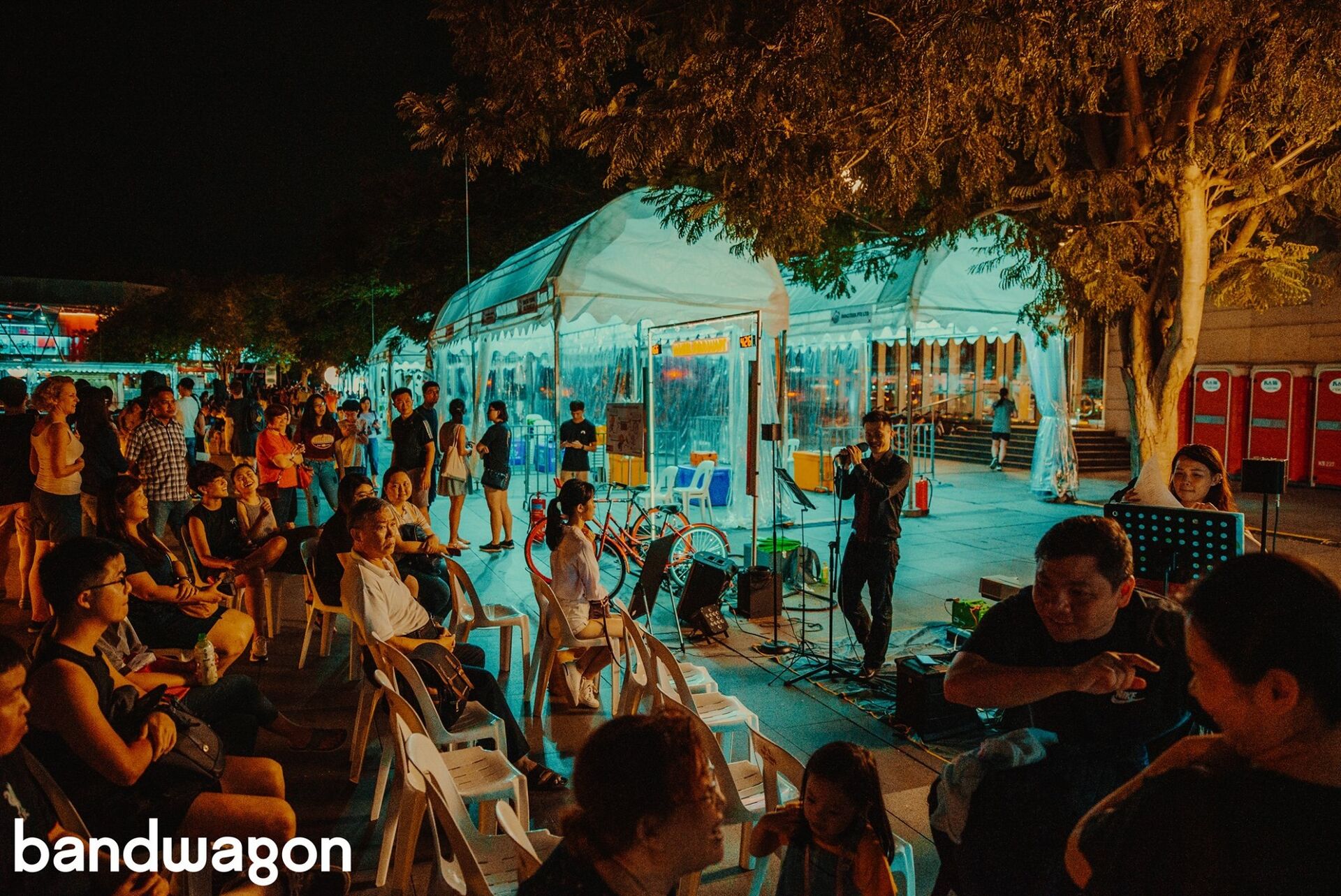 Amongst many things that locals love about homegrown music, relatability, international achievements, and raw talent stand out. Singaporeans are able to relate to local music when artists insert Singlish phrases or local-specific quips and topics into their music. A respondent shared: “I would say that SG music is grounded. The use of Singlish in lyrics like ‘lah’ brings in our local context which Singaporeans can easily relate to and understand.”

There is also a visible sense of pride whenever local artists break out on the international music scene from programmes such as singing competitions in China. Singaporeans recognise the talent that Singaporean artists have and compare them to international acts.

Despite that, Singaporeans have raised challenges that they think local artists face. Locals have noted that they prefer to listen to overseas artists because of the genres and issues that they address in their music. A respondent shared: “American or UK music has a lot of slice-of-life kind of things that they can talk about, basically hardships. I feel Singapore doesn’t have too many hardships to really put it into a song.” Emphasis on industries other than music have further shown to be a critical challenge for both established and aspiring artists in Singapore. Locals perceive homegrown music as an “acquired taste”, and have stated that there is a lack of variety and quality. 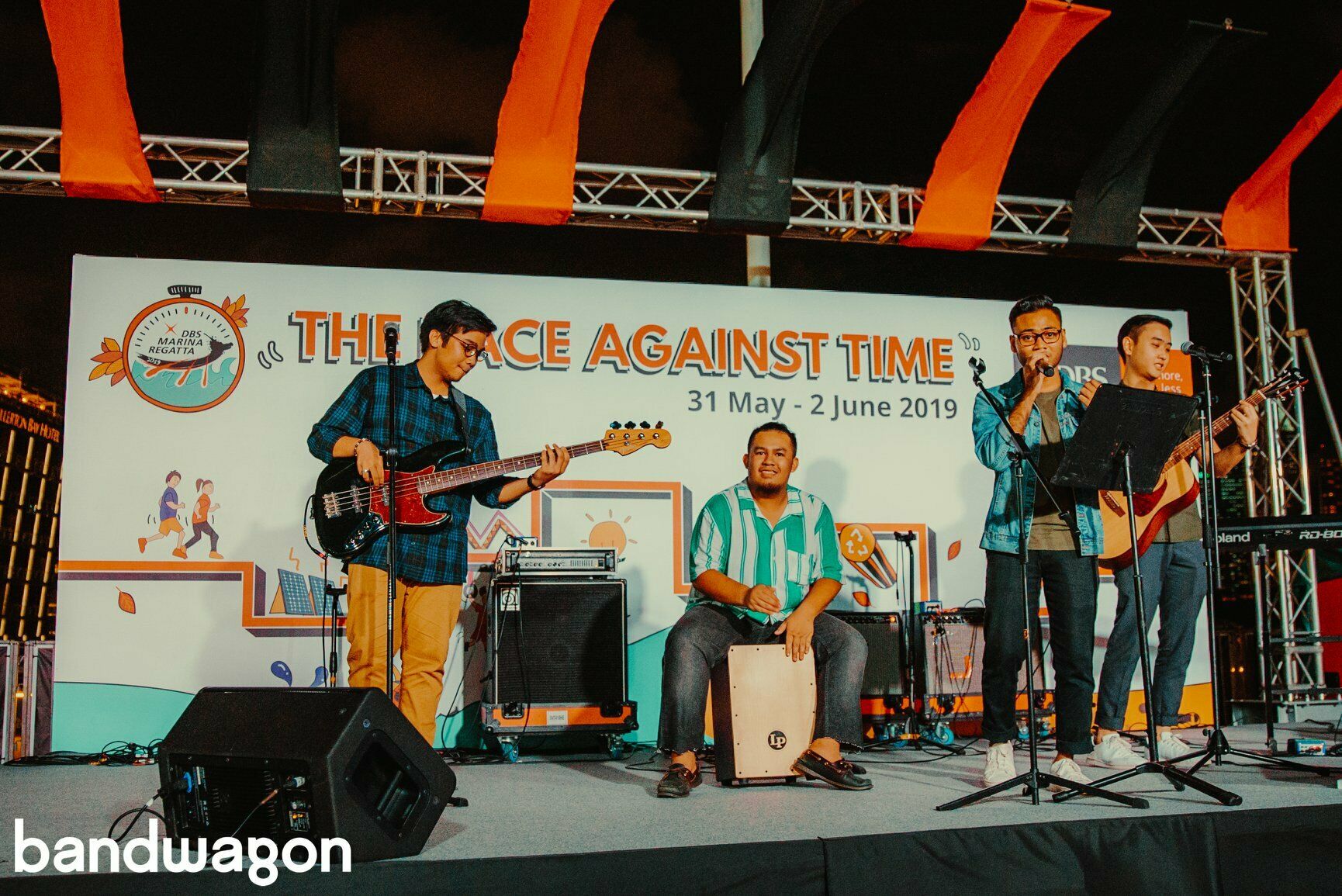 Singaporeans are unfamiliar with local artists

Generally, most Singaporeans are not familiar with local artists and only recognise those who have achieved success overseas. However, it is notable that the NAC research has also shown younger audiences being able to name homegrown acts other than JJ Lin and Stefani Sun.

Where visibility is concerned, homegrown music is considerably less visible in the eyes of Singaporeans as they are already avid listeners of a wide selection of international music from countries such as China, South Korea, and the United States. Local music fans find it easier to access international music as they are available on several platforms such as Spotify, YouTube Music, Netflix, and Disney+. Research has shown that only 26% of recommended homegrown music playlists get noticed. Singaporeans tend to discover local artists only by chance and are not active seekers of homegrown music.

50% had an improved perception of local music

It is important to note that when Singaporeans were introduced to local music during the study however, 50% had an improved perception of local music and 31% of those who were not fans of homegrown music appreciated it more. Many respondents found that the music had variety and uniqueness. 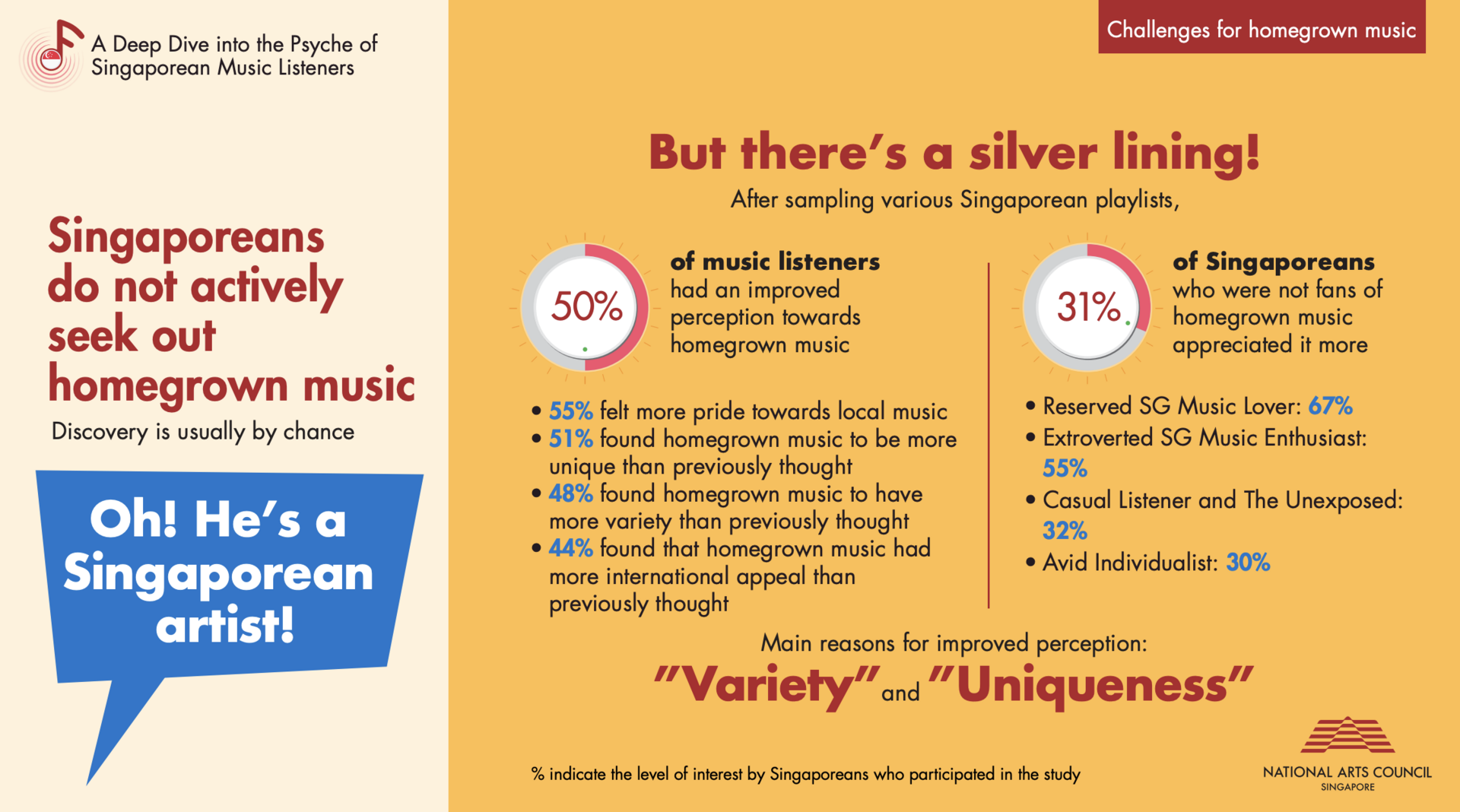 Research results have shown that when pre-exposed, Singaporeans are more likely to be receptive to local music. As such, NAC has suggested several methods to garner the interest of locals namely creating mood-specific playlists, organising performances that showcase homegrown talent, and for musicians to share about themselves through podcasts and live streams on platforms such as YouTube, Spotify, and the radio. 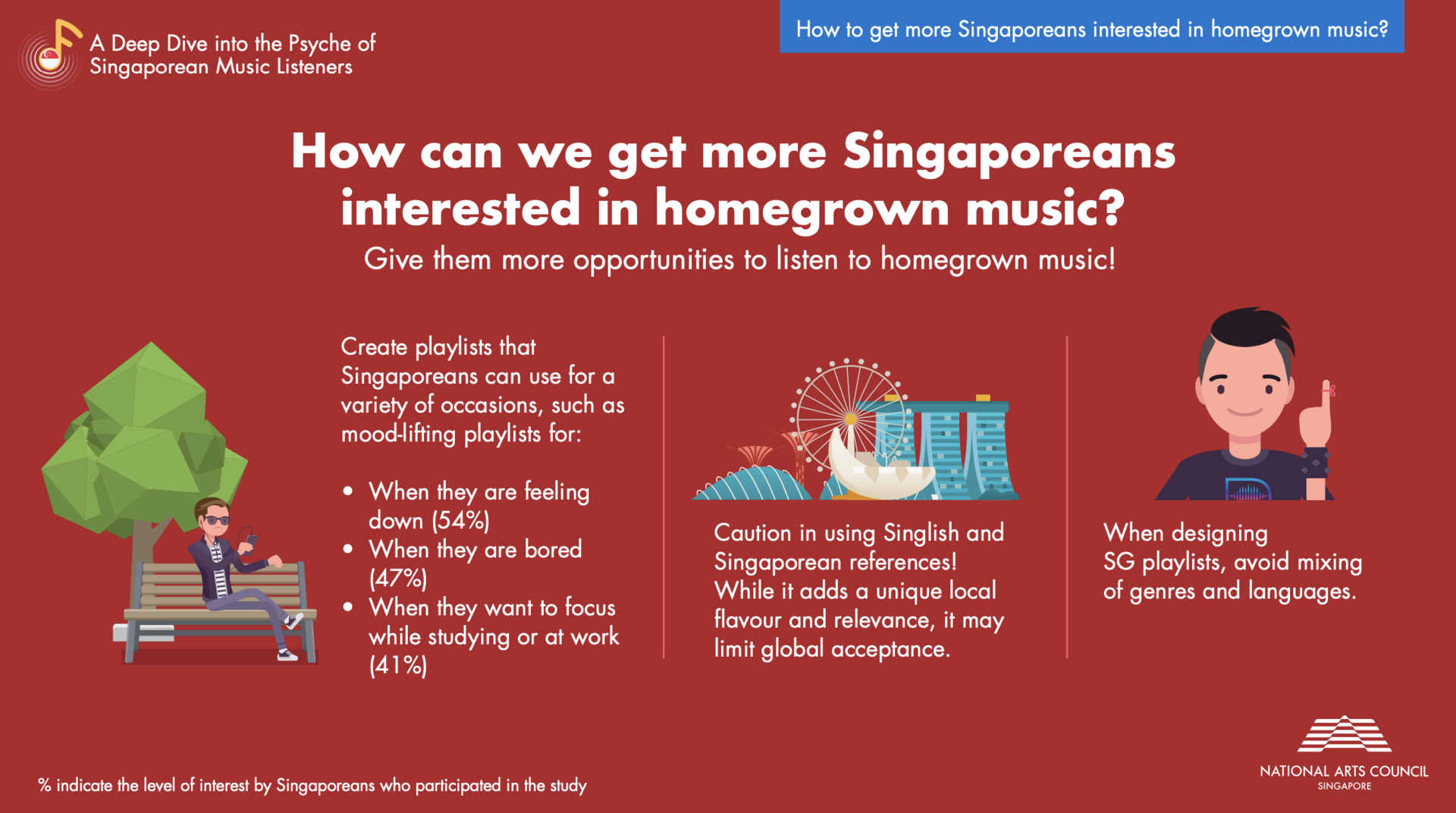 Notably, the research has found that 96% of music discovery comes from YouTube, YouTube Music, and Spotify. Additionally, it has recorded a rising interest in TikTok and Instagram amongst younger listeners. Utilising these social media platforms could point toward greater success for homegrown music. 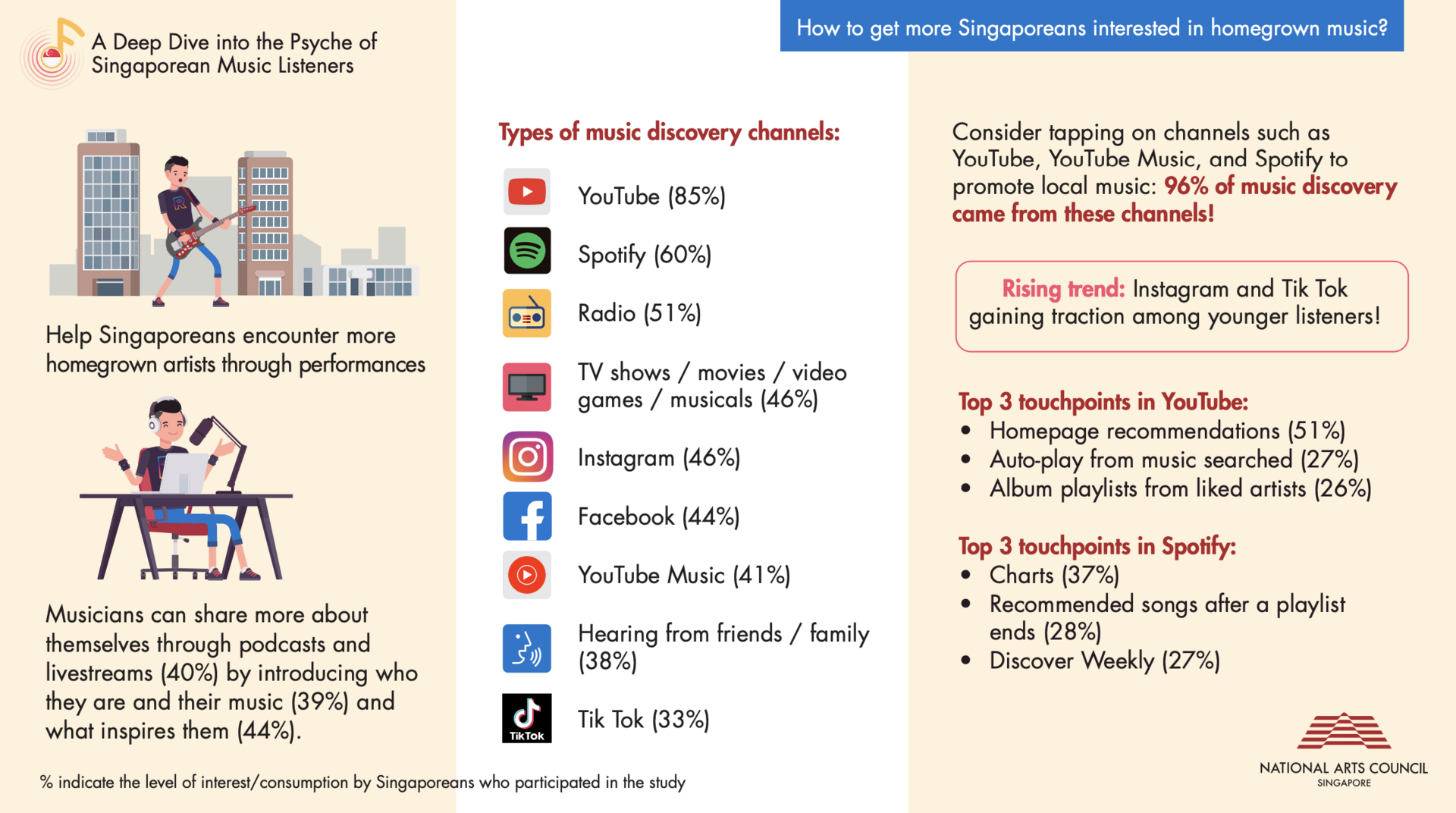