A multi-cultural society like Singapore boasts many local musicians on the scene excelling in different genres. If you ask many artists today, they'd tend to gravitate towards listening to or playing well-known genres such as pop, rock, electronic, and hip-hop. But, some artists challenge norms and defy conventional routes by traversing lesser-known genres, their love for such obscureness a testament to their persistence. One such love is country music.

The sound can be dated back to the early 1920s in Southern and Southwestern United States, originating from various genres such as Appalachian music and Cajun music. Since then, it's boasted many timeless ballads and hits from renowned artists such as Johnny Cash and Willie Nelson, legends and heroes of Country.

Throughout the years, country music has also been infused with different genres as well. Artists such as The Eagles and Dolly Parton have experimented and infused country music, making different sub-genres such as country rock and country pop, to name a few.

Although country music is appreciated more in the West for its history, the sound eventually made its way here to our shores in the 1970s. However, the country music scene has struggled to achieve visibility in Singapore, even to this day. The lack of promotion of the scene is a common struggle most of our local country artists face, combined with misconceptions of the genre from the general public.

In this article, Hear65 casts a spotlight on the downright hidden and frequently undiscussed country music scene. Speaking with Leonard De Cotta of Leonard and the Country Riders, and Mel Ferdinands about their early beginnings, struggles, and appreciation for country music on our shores, we come to understand the importance of this genre back then, and how it operated as an outlet for the obscure. We also unearth the legacy of Matthew and the Mandarins, widely considered one of the earliest musicians to pioneer and populate our brand of country music for this island.

Early beginnings and history of the local country music scene

The first memory of the local country music scene started with Matthew and the Mandarins in the 1970s. One of the pioneers in the scene, Matthew Tan resonated with the genre with his life when he was younger. By the time he'd finished school in 1965, he formed the band with his friends and started their early days by playing part-time gigs in local hotels, before converting to a full-time band.

Armed with the desire to learn more about the industry itself, he moved to Nashville in 1975 after saving enough money, something Tan remarked was a dream ever since he entered the entertainment scene. “I’ve always listened to a lot of the music that came from Nashville,” Tan described in a 2013 interview with Imagine TV Network.

"In my own personal capacity, I pursued it by buying the country records, and I listened to it a lot,” Tan recalled. “As I grew older and read about the history and news, I kept thinking “Maybe one day, I want to go there and do some recording, and learn more about this stuff.”

Throughout his career, he has earned several achievements. He performed a duet with American country singer Skeeter Davis, making the first Asian artist to sing at the Grand Ole Opry.

He eventually returned to Singapore and recorded the iconic 1978 single ‘Singapore Cowboy’, which reached the top of the charts then. Most recently in 2014, he received the Asia-Pacific Lifetime Achievement Award at the Canberra Country Blues & Roots Festival for the track.

When asked about the success of the single in 2014, Tan explained: “I never expected that this song will be successful. But I guess people feel that they can relate to it because this country song is sung by an Oriental guy and the years of growing up in the song refer more to a Chinese childhood."

Along with Matthew and the Mandarins, other country singers in Singapore emerged as well. Enter Leonard and Bernard De Cotta, known as The De Cotta Brothers, who play a wide spectrum of country music from classic country to outlaw country, and with new members, they formed Leonard and the Country Riders. 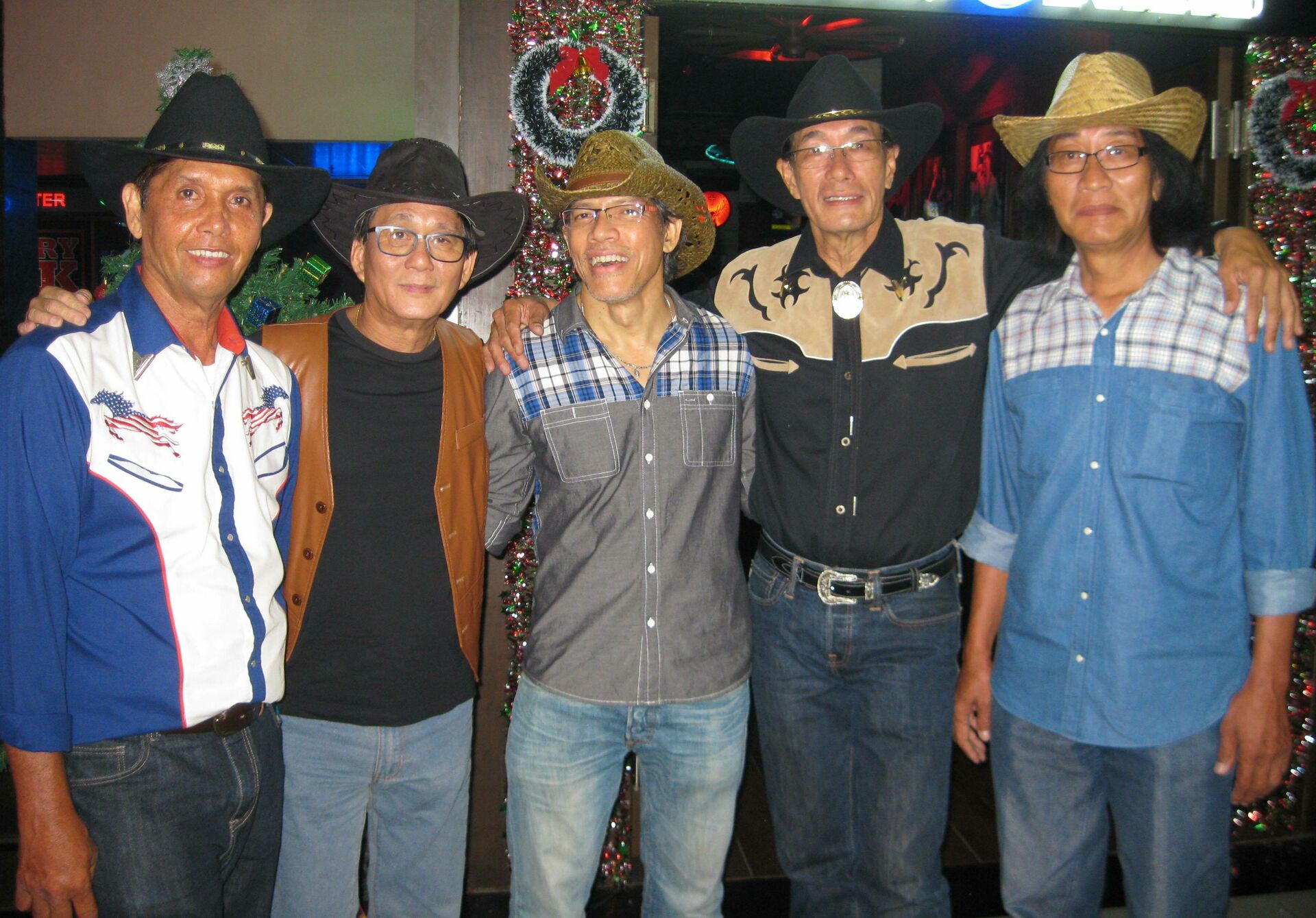 Leonard and the Country Riders

Country music in the 70s to the 90s was at its peak and according to De Cotta, it was due to the number of oil riggers that visited the country. “Most were from the United States who were largely country music lovers and they went to night spots that featured bands that performed country music,” explained De Cotta.

Mel Ferdinands was also a big purveyor of country music then, and he is well-known for being a member of the band Gypsy, and plays country music with his brother Joe Ferdinands under Mel & Joe. However, as time went on, there seemed to be very few avenues for local country artists to showcase their talents.

“When I was performing full time in the 80s and 90s, the country music scene here was very vibrant,” described Ferdinands. “There were several country pubs and bars and many country bands at the time. Now, it seems to have taken a bit of a back seat.”

To say that there is a lack of promotion for country artists in Singapore is an understatement. “When I was performing full time in the 80s and 90s, the country music scene here was very vibrant,” described Ferdinands. “There were several country pubs and bars and many country bands at the time. Now, it seems to have taken a bit of a back seat.”

As time went on, there seem to be fewer and fewer avenues for local country artists to showcase their talents. There were no country music associations or clubs to promote good country music; radio stations in Singapore do not, if rarely, spin country tunes on the airwaves, something Ferdinands expressed brewed frustration: “The younger generation has never been exposed to any country artistes or music for the longest time.”

With the COVID-19 pandemic, especially when the live music industry has come to a sudden halt, these country artists were left with even lesser platforms to reach out to Singaporeans to promote the sound. Like every artist, they had to take steps to adjust to the crisis through live streams and social media, something that is a challenge for them due to competition with other popular artists on the internet.

With the scene mostly being placed in the backseat, it’s hardly surprising that being a local country artist is also bundled with misconceptions from the general public, and distinct musical traditions in Singapore.

He also believes that the issue of the lack of promotion for the genre stems from being a musician in Singapore, a profession that already bears its own reputation and shuns. “Actually, some of the struggles were being stigmatised for choosing a profession in music. There was also quite a bias against local performers as well,” Ferdinands elaborated.

This is a situation that comes to no surprise. In Singapore where the arts are not considered as the main priority, many Singaporeans would only consider a local musician successful if they were to be able to attain success in overseas markets. The lack of appreciation has been the subject of contention, with various Singaporean artists speaking out on the topic over the years.

Tan also mentioned that governments should step up to help local artists in the music industry. He explained in an interview with Imagine TV Network: “No record or production company will be able to do it without the big help of the government because they have all the networks in their hands.”

Due to the negativity and low publicity surrounding the local country music scene, it gives many reasons for country artists to have an option to stick to the genre or switch to one that brings them prospects and attention. Despite the odds, they are willing to stick to their roots and believe in their passion for their craft.

“I will not switch genres. It never crossed my mind even though country music is not as popular as other genres in Singapore. Country music is in my blood and rooted in my DNA,” De Cotta said.

“I appreciate those country music legends who wrote their valuable life lessons into their songs, and this is why it has always been a big part of my life.”

Reflections of the country music scene

These artists played country music for decades, strumming tunes that tug at the heartstrings for many. To them, it’s safe to say that they are ceiling breakers of their genre.

“A couple told me they were finally able to reconnect with traditional country music because of me,” De Cotta recounted. “I am proud to be recognised as a country singer. I am pleased whenever people tell me that they enjoyed the long-forgotten country songs, that I have brought life to them.” Ferdinands commented: “Just being able to play and touch someone through music is already rewarding in itself.”

For Ferdinands, having played many styles of music during his time in Gypsy and Mel & Joe, his favourite part about the genre is the different techniques that he gets to play in his performances, and the vocal harmonies that entwine with it, citing various crossover songs and artists such as a tribute album to the Eagles by various country artists, and Lionel Richie’s collaboration album Tuskegee, which boasted many notable country artists like Blake Shelton, Tim McGraw, and Shania Twain.

"I would just be happy if people remember me as a true lover of country music who sings from the heart," Tan said in a documentary titled Singapore Country. "I genuinely enjoy singing for people, and that's what I like to do best even till today."

Country music may be a niche area, but these musicians showed their encouragement and gave words of advice to their peers as well. In a message for the local country music community, Ferdinands said: “Keep doing what you love, stay true to yourself, and never be afraid to dare to dream.”

Advising potential aspiring country artists, De Cotta said: “If you want to sing traditional country music, sing the way it should be sung. Understand the meaning of each song because you will know exactly what it should feel like. You can have your own style but don’t lose the melody. You don’t have to achieve the perfect country twang, but once you’ve gotten a good grasp the wave will come naturally.”

For a look at Getai, an often forgotten pillar of the music community here as well, check out our piece where we speak to some of its established purveyors, and how its adapting itself for the modern age.

NEXT UP ON H65
LASALLE Rock & Indie Festival 2021 returns this September with stellar lineup featuring Houg, Forests, Caracal, Kitty Purrnaz, and more
Kaye debuts groovy single 'Right For Me' from forthcoming album 'Distant Dancefloor' via Darker Than Wax
After 8 years, Gentle Bones announces debut album with tracks from Jasmine Sokko and lewloh
13 covers by Singaporean artists that should be official: Linying, Aisyah Aziz, Nathan Hartono, Joanna Dong, and more
SING'THEATRE brings back Forever Young, the acclaimed jukebox musical with a spanking new cast
The Substation 1.0's final days as it moves out from 45 Armenian Street
What 'The Road Ahead' looks like for NDP artists Shye, Shabir, and evanturetime