While some of us might join our friends for the occasional go-kart racing for an adrenaline rush or sing karaoke and book a studio for a jamming session, 12-year-old Emiliano Cyrus (EC一平) does all of that as part of his professional career. On top of being a student at an international school in Singapore, the child prodigy also dabbles in side projects such as professional kart racing, modelling, acting, singing, and the list goes on.

Dubbed the 'Wonder Boy', the Singaporean artist of Portuguese descent has achieved an astounding number of achievements at his tender age of twelve. To date, he has ten songs in his discography, one of which was self-written by Cyrus himself, titled ‘Wonder Mom’ as a Mother’s Day dedication.

Most recently, Cyrus released  ‘Sweet Fragrance 芬芳’, the official theme song for an upcoming movie in China, Covenant of Slam Dunker 灌篮高手的契约. The song has gone on to top multiple charts, most notably clinching #1 on the Weibo Superstar Power AsiaPacific Charts on 16 November, as well as #3 on China Central Radio and Television's Global Pop Music Gold List on 11 December.

Besides lending his voice to movie soundtracks, he has also starred in a number of them and is set to embark on his fourth movie role, Home, Spring, and Autumn, in the coming months.

Gracing silver screens and grand stages, while also leaving his mark on racetracks all over the world, the million-dollar question remains – how does this 12-year-old boy do it all?

How did you discover your passion for music and get started in the music industry?

I used to sing songs from the radio, and tunes from artists such as  Michael Jackson inspired me to become a musician. At the “Home Team Show 2017”, I met the famous Dick Lee, who discovered me and then became my mentor. The song he composed for me, 'Wonderful神奇', led me into the music world. 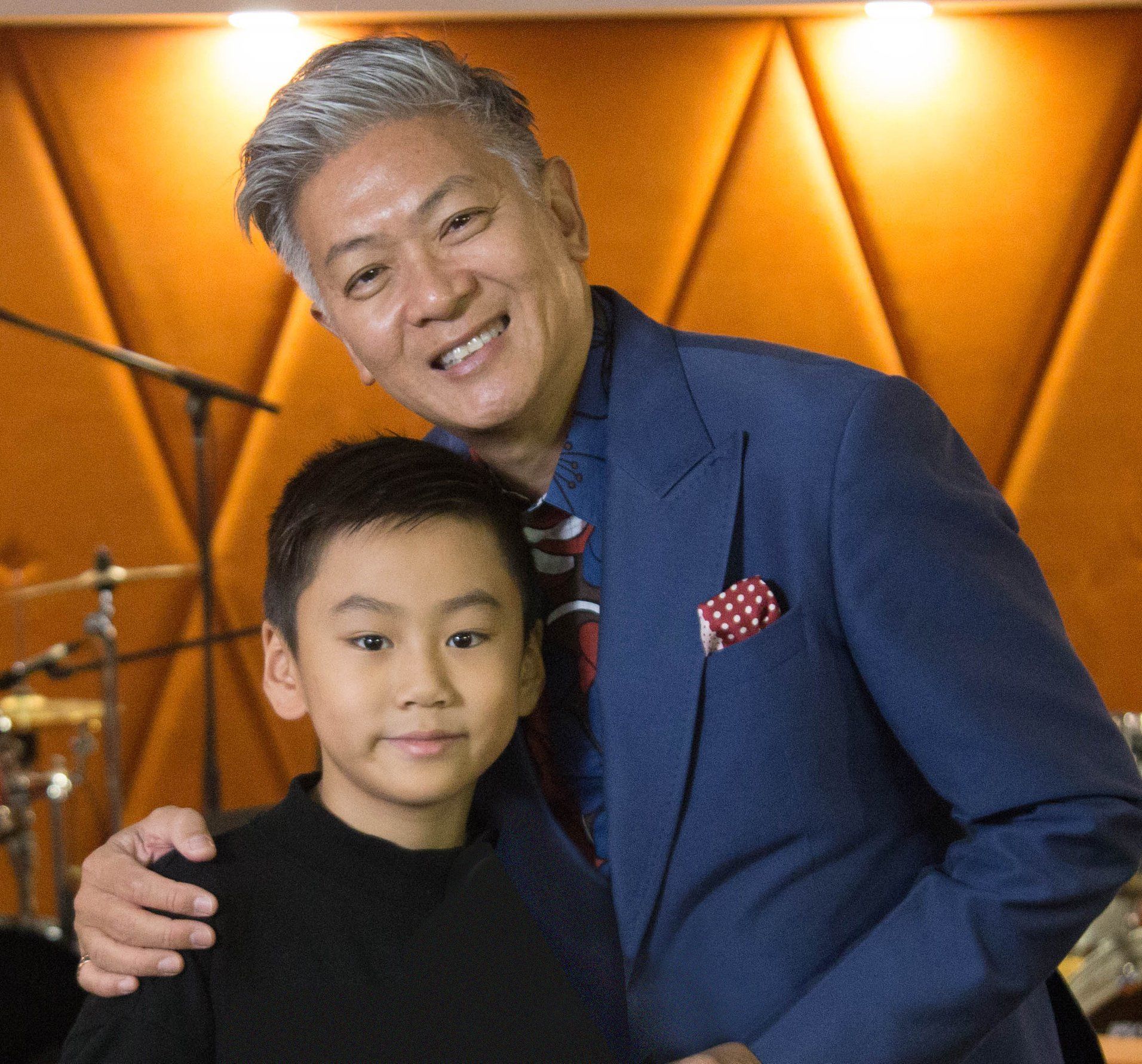 Coincidently, the famous international Music Producer, Qing Feng 卿锋, created《Wonder Boy 小玩童》which was my first hit and marked the beginning of my music career when I debuted in 2017. 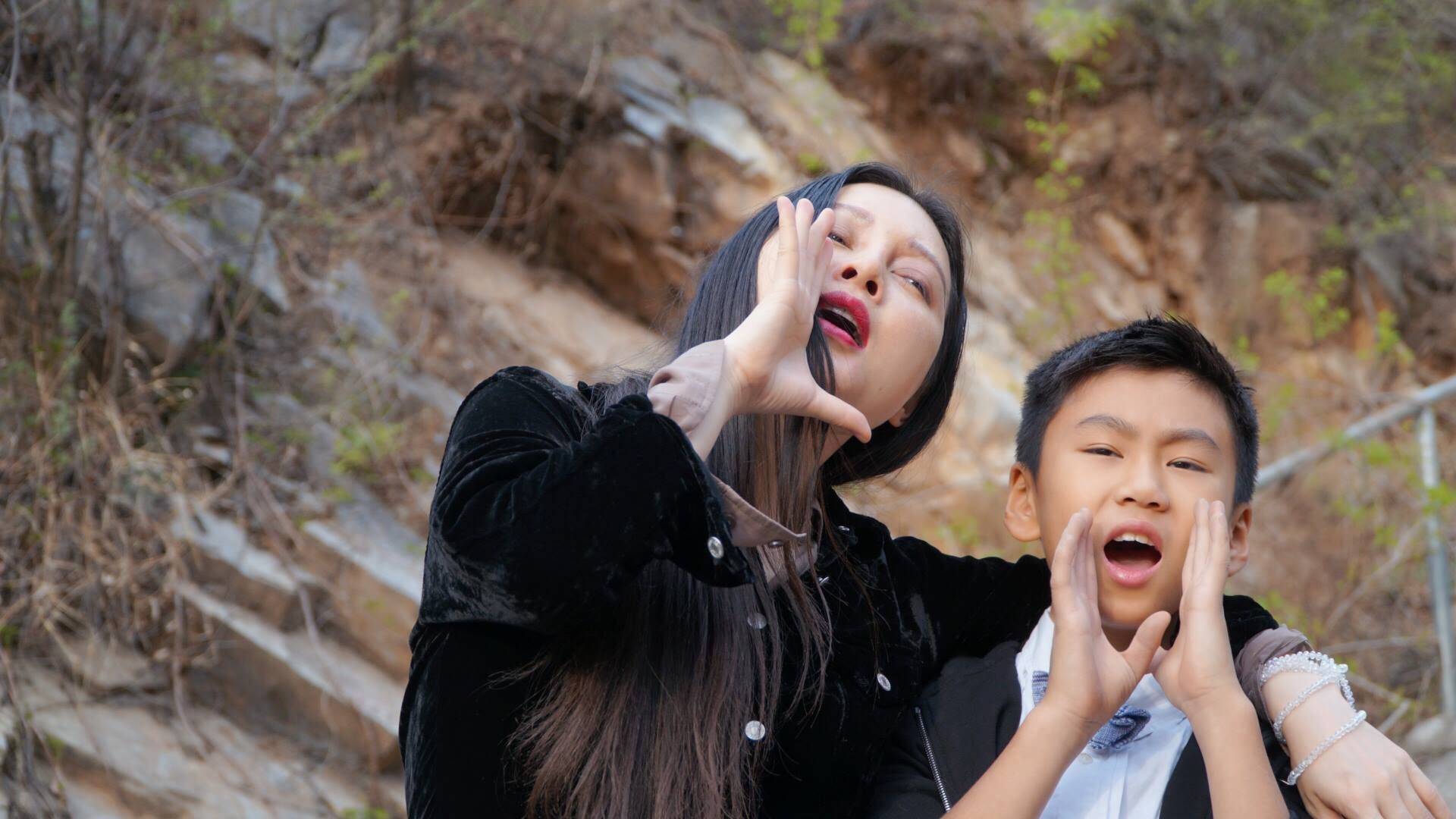 Cyrus with Zeng Yan, whom he describes as a fairy mentor, and "a passionate musician who never fails to put perfection in every pitch".

You just released a new music video, ‘Sweet Fragrance’, performed by yourself as part of a new movie’s launch, ‘Covenant of Slam Dunker’, what was it like to sing for a movie theme song?

Besides singing the movie theme song 'Sweet Fragrance芬芳', I also acted as the younger version of the lead role “Jiang Yi”. I felt that acting helped me to immerse myself in the Slam Dunk story, which emerged in my performance of the theme song.

The movie tells the story of high school students from a basketball team chasing their dreams and showcases positive vibes of the youth who show determination, perseverance, unity and sportsmanship - the slam dunk spirit. Through my voice and singing of the theme song, I could also reflect the passionate sportsman and actor within me. 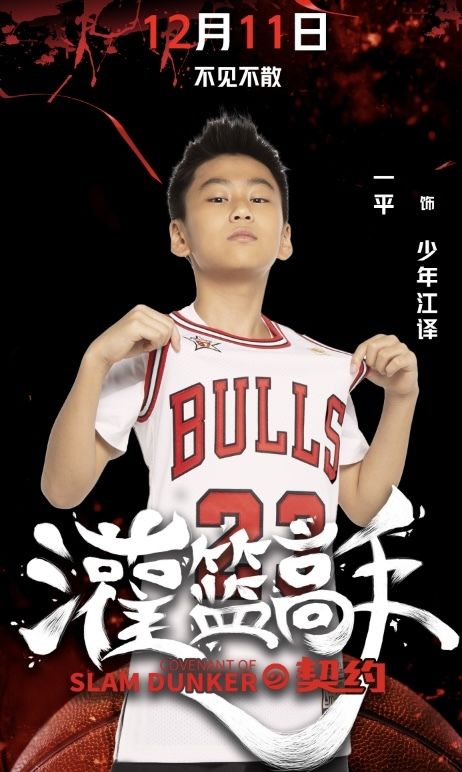 Featured in the poster of his upcoming movie, Covenant of Slam Dunker

Apart from music, you also dabble in professional kart racing, acting, all while schooling still, why did you decide to do music?

Music is my life and it makes me happy. I believe in the power of music, and how music has the power to influence the world in a positive way. I hope people will feel motivated and touched after listening to my music. I also hope it brings people joy, hope, love, and strength, inspiring them to pursue their dreams. 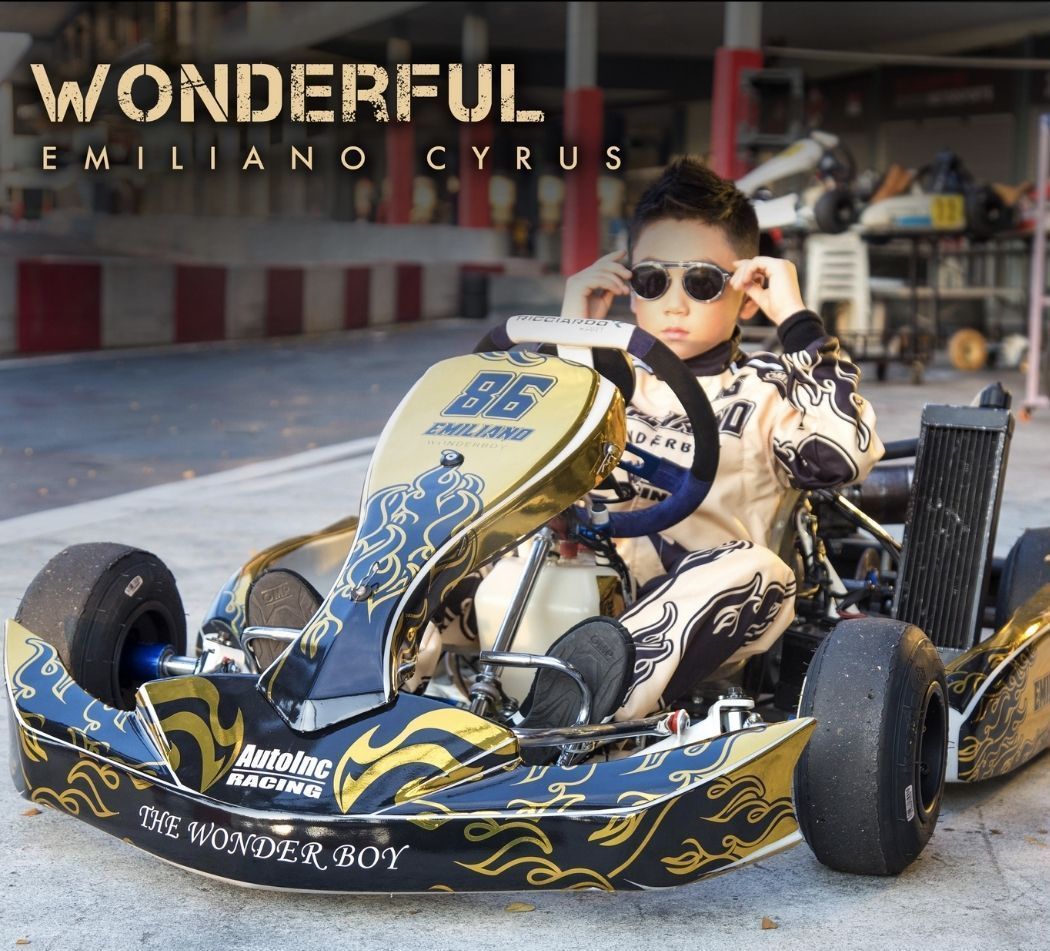 Racing with his personalised kart

Being a professional kart racer is the chance for me to relieve my stress at every corner of the track while competing with other racers from all over the world. It’s a perfect combination of my music world and my racing world, as all performances are scheduled during the school holidays. I am still a full-time student, so education is still the most important thing in my life.

How do you balance your time creating music, juggling your studies and finding ways to enjoy your other creative pursuits?

My mum and PR team managed my daily schedule for both school and creative pursuits since my debut in 2017. I am equally passionate about kart racing, singing and acting. I feel that it is a perfect balance in my life while I still have playdates with my friends. For example, I had vocal training with my music mentor in Cyprus before travelling to other countries like Italy or France for kart racing and sight-seeing during the school holidays, which saves much travelling time in the air. 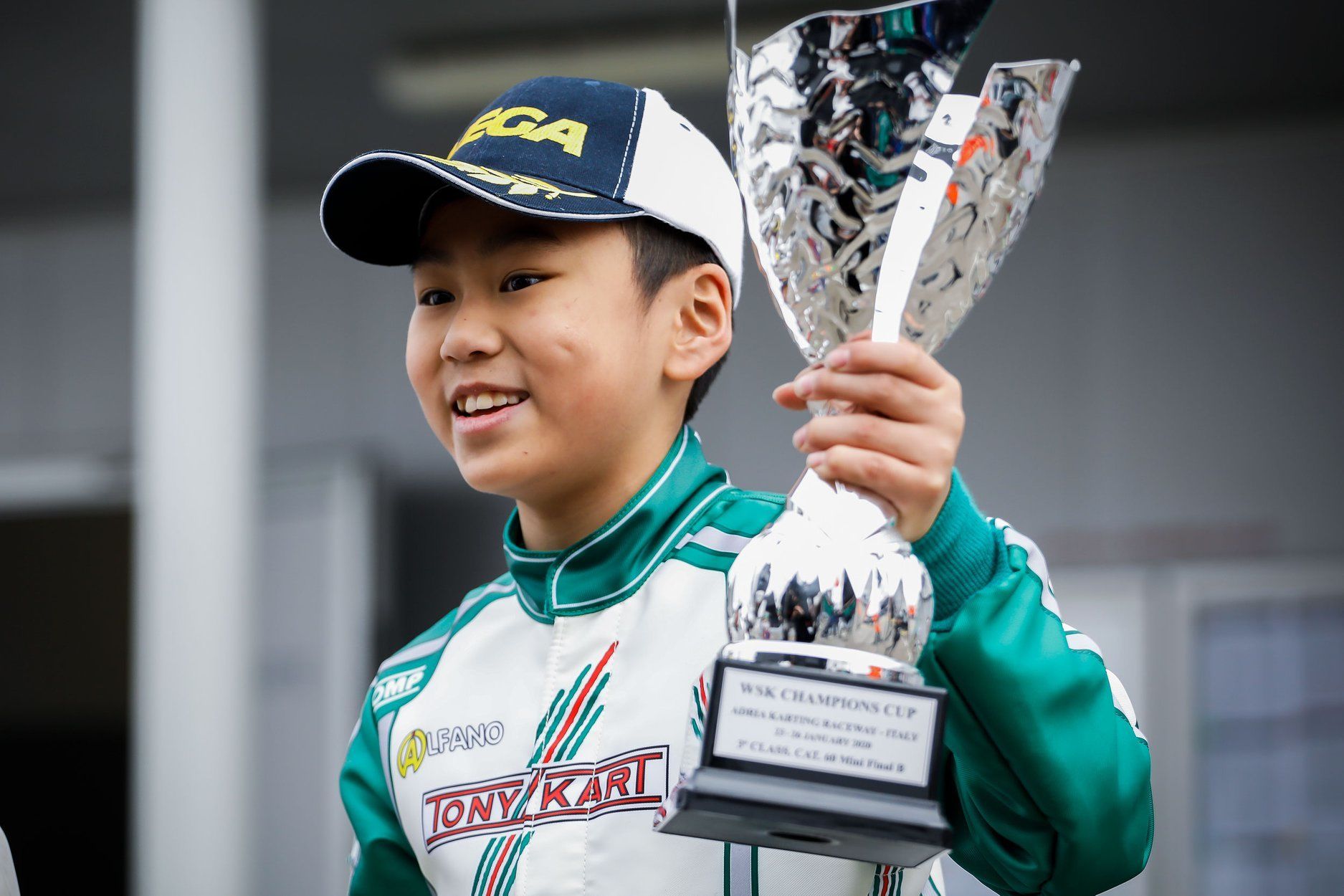 Which is your proudest achievement and why?

I guess that will be acting as the child lead and singing the movie theme song for Covenant of Slam Dunker 灌篮高手的契约. I am surprised that the latest hit was at the top of multiple Music Charts within the first three weeks of its release.

You will be performing two movie theme songs at the Asian Television Awards Ceremony this year, do you get stage fright? How do you practice performing in front of large audiences?

I don’t usually get stage fright after years of stage experiences but I may feel a little excitement mixed with some nerves before getting on stage. Once I stand in front of the live audience, I am immediately immersed in their passion.

Throwback to Nanchang Music Festival where I performed in front of a live audience of 50,000 people -seeing the thousands of light sticks shine brightly from a distance, cheering me on while swaying to my songs, and the huge banners with my name, it touched me so much. No artist is an artist without the love and support of fans; once I think about them, all the anxiety is turned into motivation to show them my best.

"My fans are like gemstones, rare and precious, they fan my flames."

I appreciate the opportunity to be invited to perform together with my “Wonder Boy” mentor Dick Lee on the same stage for the Asian Television Awards Ceremony 2020 this December and I am also excited to perform the newly released movie theme song 《Sweet Fragrance 芬芳》of  [Covenant of Slam Dunker 灌篮高手的契约] and 《The Closest Embrace 最近的拥抱》of [Mountain Flower 山花] which I also acted as the child lead “Qi Hu 祁虎”. A live TV show without a live audience might make me a little bit nervous but I will be comforted by the thought of my fans.

Moving forward, what are some of your goals for the new year in 2021?

I am looking forward to especially meeting my fans at movie premieres and roadshows in the different cities. It would also be a bonus if I could act in one more film!

Hopefully, a new song of my own music production will be out in 2021 since I embarked on a new musical journey staying home this year – music composing. It is a fun and challenging process but in order to fully understand music, I feel that one should experience the full spectrum of the musical journey to be well-rounded as an artist.

With COVID-19 taking over the world this year, in 2021 I wish to spread more love and warmth that will make this world a better place. Hoping everyone stays safe, healthy and positive!