One evening night in 2021, Deepak Prashad gets a text from his close mate and fellow DJ Shaun Nocturnals after the former had wrapped up a casual, livestreamed set on social media from his own bedroom. Prashad, an established tastemaker in the scene and resident at the esteemed CÉ LA VI Singapore, had engrossed the attention of many online who missed the clubs and its scintillating tunes - and as a seasoned curator himself, Shaun certainly mirrored those sentiments too.

This was after all, a time when social distancing measures were at its most potent, and that meant dancefloors, along with many other cultural sentiments were of second, third, last priorities to many. The follow-up texts from their exchange was one many musicians and artists wouldn't be unfamiliar with - to get on decks together like the great ol' days of live music, even if it was in a bedroom.

Prashad had capped his livestreams off by expressing what his broadcasted bedroom sets, within just his four walls, meant to him: '#therapyroom', something which he later admits came as a natural labelling off the top of his head. It was a pressure valve of sorts.

"Music is therapy to me. And everyone was then asking me after my stream, 'Oy, what is this #therapyroom?", charting the first signs of interest to Prashad of a recurring programme.

"I like when people open up to me, as I open up to them too. When Shaun came over to jam we started talking; about how we've been doing (given the state of things), the music scene, the industry. The idea became interesting when friends started asking if they could join. And so I invited DJs and musicians who I knew personally to share the space, abiding strictly by the restrictions of course."

"Before we knew it, my room became therapy for these people too."

From the struggles nightlife stewarts of a bygone era faced, to making ends meet, to the often unspoken detriment to their mental health especially as of late - Prashad witnessed, what initially was his safe haven, becoming the safe places for like-minded folks to express themselves too.

"Everyone was opening up to one another, there was no judgment, it was casual, and you could see it was therapy for them as well. We spoke about things like their journey, what they were going through. I've had people cry in my room - many were depressed. They spoke about the bad times they were going through, but thanked me for allowing them an opportunity to play music."

"It was a chance for Shaun and I to sit down and think, 'let's do this Therapy Room for real', inviting people to prepare a set and chat for an interview too. We wanted to ignite them, while letting them speak their mind." Soon after, things took off.

Scratching the notions of fame or viral marketing away - these were artists uplifting the scene, their craft, and a championing of a culture that had been forgotten and neglected. They've been running this out of their own pockets as an ode to a presently abandoned industry, and it was a way they knew how to give love back.

"After a few sessions, there were people asking if we needed 'likes' or views on social platforms. And I said 'Listen, if just one person watches this and it changes their life - that's all we want.' We wanted to take an approach that wasn't just playing music, but to do it to speak to people, what their background was, who they are. No pressure on views, or how big we are as a platform."

"I had a few people from the industry reach out when we had just launched telling me I was wasting my time, that there was no money in this. And while I'm sensitive to these things, Shaun pushed me on and said 'screw it' - if we can make someone's life better for 90 minutes, whether that's artist or audience, why not?"

Speaking to the pair when it was just the third quarter of the year, they sought to dish out videos regularly, from any genre, established act or otherwise. They settled on a weekly release schedule - and they've been keeping to it. Their current team, which also consists of sound engineer Plako, entertainer and magician Kyle Ravin, and another DJ in the scene, Ulyssess, run Therapy Room, its hardware, contributions, and social media/programming out of the goodwill and connections they've made throughout their respective careers. They do this alongside generous sponsors, who are more like friends than just a business name on a poster.

As well, their track record so far is hefty, with veterans like Joshua P, Brendon P, Darker Than Wax stewards Kaye and Daryl Knows, Kenneth Francis, and Aldrin, amongst many others. When quizzed on how the reception had been after facing negativity, they'd proven themselves right, and all the naysayers wrong - Therapy Room were booked out till January 2022. 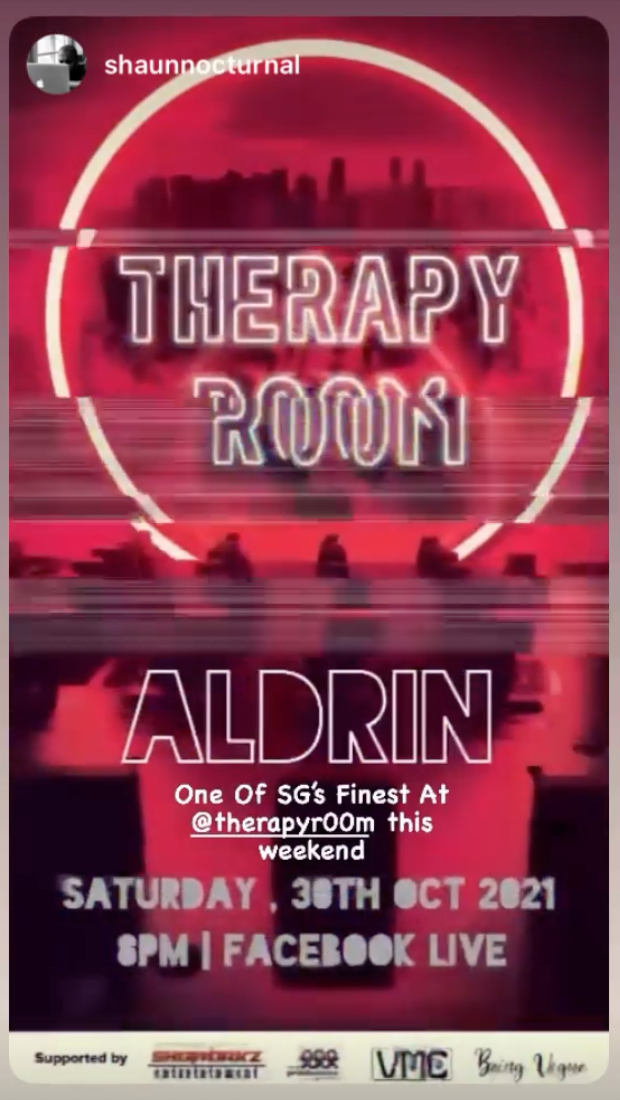 "We've had many young DJs, up-and-comers message us on contributing a set, and equally as many established names reaching out to say what a fantastic initiative this was. This is a passion project, and we're forking out our own money. But we want to keep going no matter what, doing this good thing, inviting everyone of any age as well."

And while they're buzzing for a proper return to the circuit, the team's spirit to thrive in a new environment, when things are back to normalcy, is equally eager. After all, they're equipped to do so. The team's make-up have heavily toured regionally and internationally to brandy their wares, and are regulars to many local hubs as well; most notably, Prashad was the driving force behind booking The Martinez Brothers' for their powerhouse Cercle set atop Marina Bay Sands.

And while Therapy Room was birthed as a communion for the pandemic and its victims, it stays ready to pivot out of it as well, spreading love on bigger, but tightly-knit scales.

"In the future, we definitely want to hold proper events, pop-up parties. But we want to keep the intimate vibe with the DJ going, just like what we're doing now, and unite the scene back. We know we have to keep going with Therapy Room. We'll be ready."