In the last few years, Singapore music has grown exponentially. We see new releases drop every single day, and how established and upcoming artists are shaping the music landscape. At Hear65, we're direct witnesses to how far the local music scene has come and we can't help but feel like proud parents sending off their kids to college. As it turns out, most Singaporeans feel the same way too!

According to the 2019 National Music Consumption Survey, conducted by the National Arts Council (NAC), 41% of Singaporeans could distinguish local music and artists from other (parts of the world) and that 61% were proud of homegrown musicians and their work. In fact, Singaporeans listen to over 100 minutes of music, per day.

The survey aims to determine how and why we consume music the way we do, as well as discover the public perception of both local and international music. In its sophomore run, NAC surveyed 1,017 Singapore citizens and permanent residents, representative of the population, from July to August 2019, before the ongoing pandemic.

Here are some key takeaways from the survey: 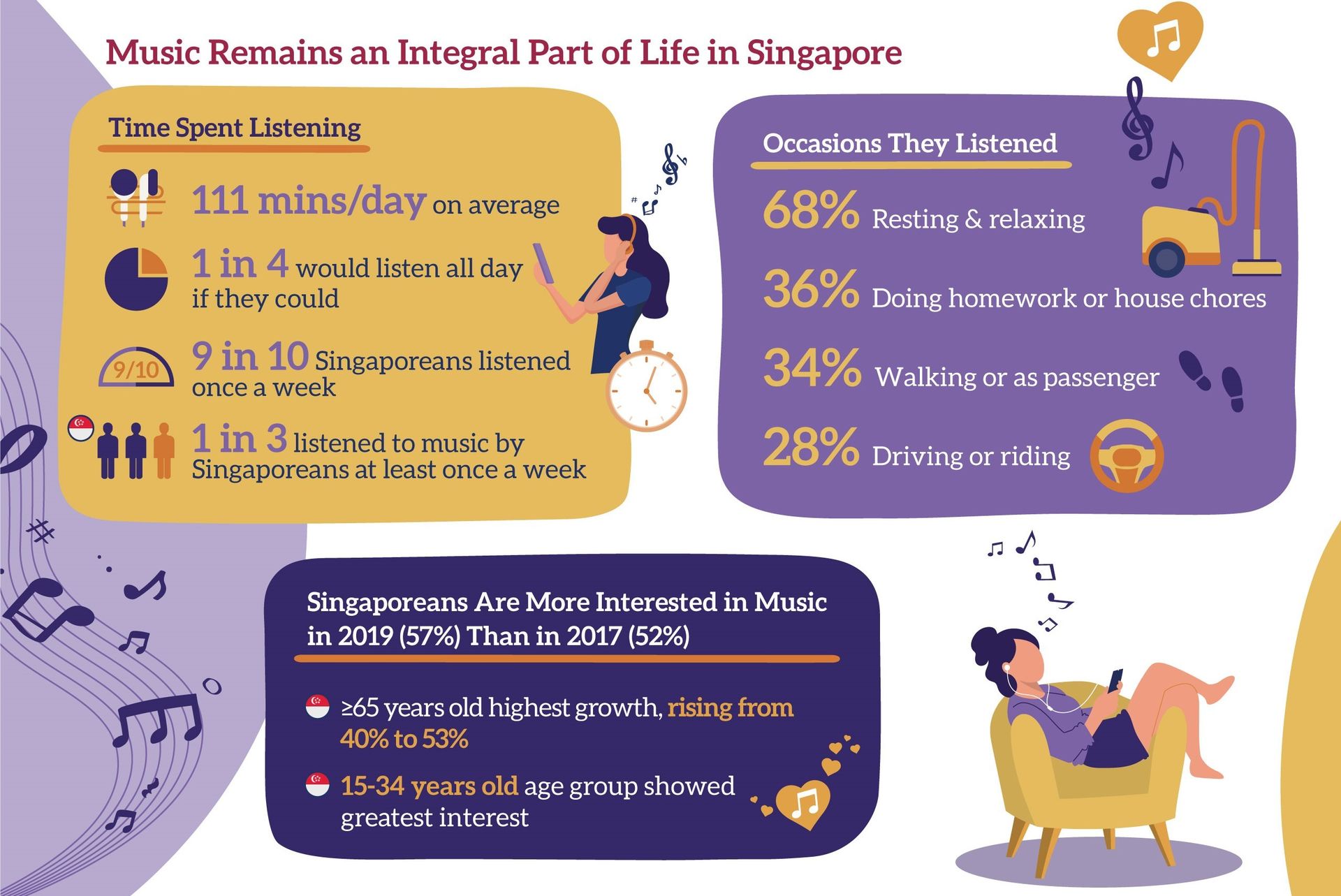 Compared to 2017, there is an upward trend in interests in music, and that music remains to be an integral part of Singaporeans' daily lives. On average, Singaporeans would spend 111 minutes per day listening to music, with 68% listening to music while relaxing and 36% while doing homework or house chores

The survey also revealed that, while 15 to 34-year-olds are still the greatest group to like music, more aged 65 and older show a growing interest.

53% of Singaporeans can easily find information on Singapore music

With the growing number of accessible resources and platforms, local music has started to gain traction among Singaporeans. Over half of the public can now easily locate information on Singapore music, and find local musicians. This shows an increase compared to 2017, where figures have grown to 53% from 48%. 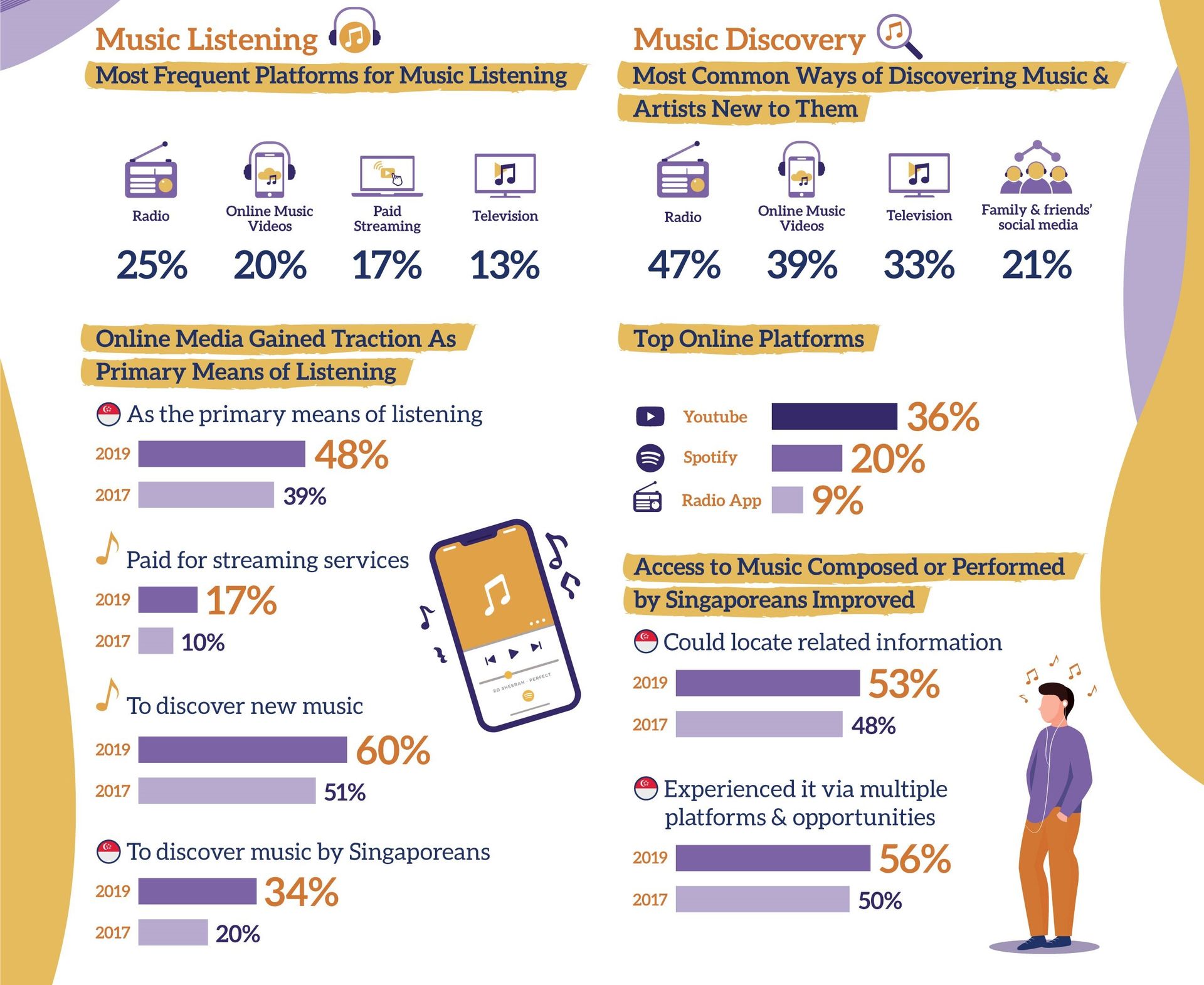 More Singaporeans use online platforms as their main sources of music

Coinciding with the previous findings, Singaporeans' use of online media, for both streaming music and finding information on local music, has increased, and has become of their main source of music. According to the survey, 48% used online platforms, like Spotify (20%) and YouTube (36%) as their primary means of listening.

Based off of this, the use of online platforms for arts and music have seen a significant rise, even before the pandemic. According to the 2019 Population Survey on the Arts, also conducted by NAC, 3 in 4 Singaporeans are reported to have consumed art programmes and activities via digital and online platforms. 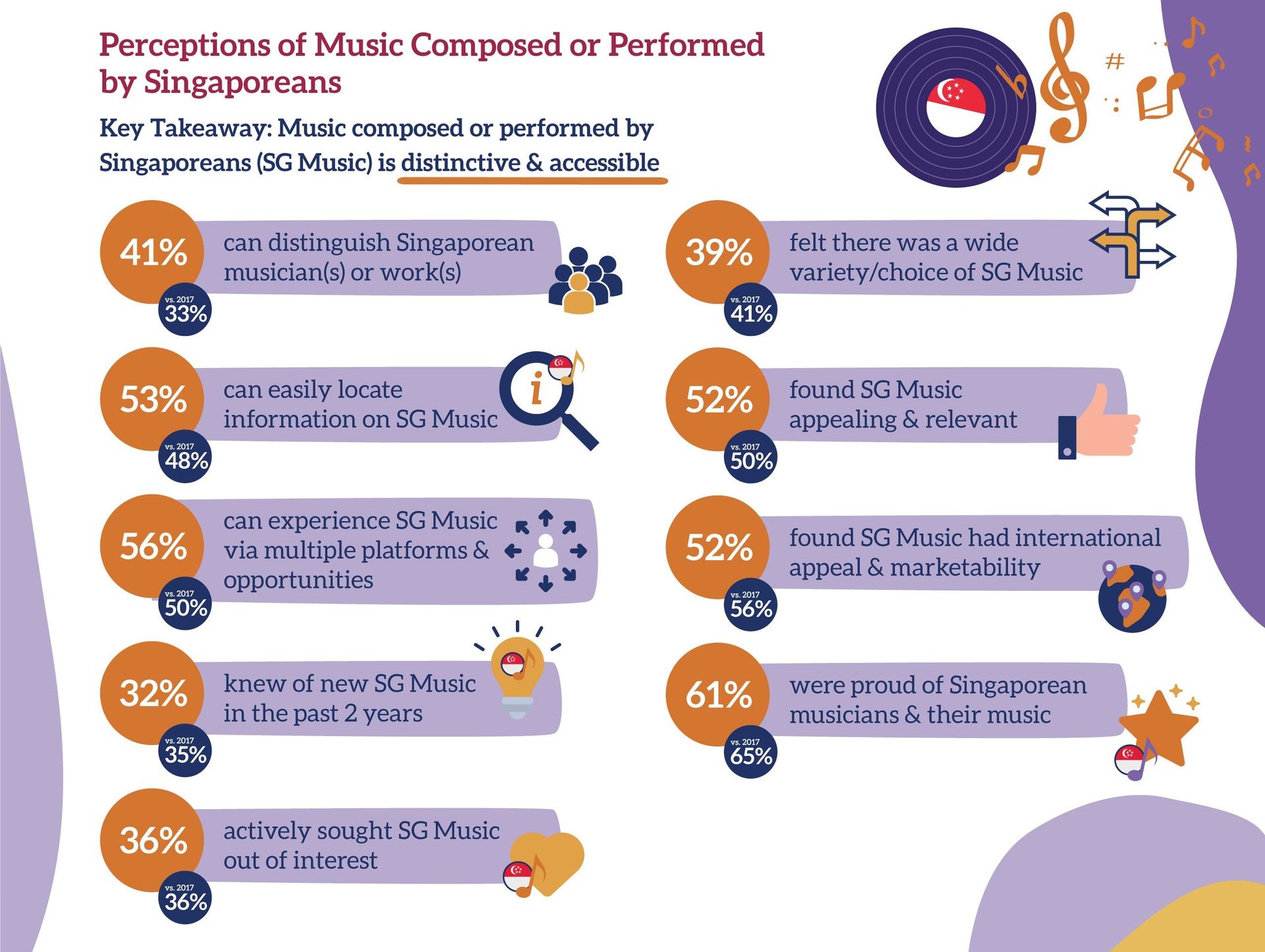 According to the survey, 3 in 10 Singaporeans attended an average of 4 music events within a 12-month period. 16% have attended paid events, while 7% have watched Singaporean musicians perform live.

The study found that less people are using free platforms for music, significantly dropping to 58% from 88%, and that 1 in 5 Singaporeans paid to listen to music, which includes subscription-based streaming, downloads, CDs, and more.

Check out the full survey here: